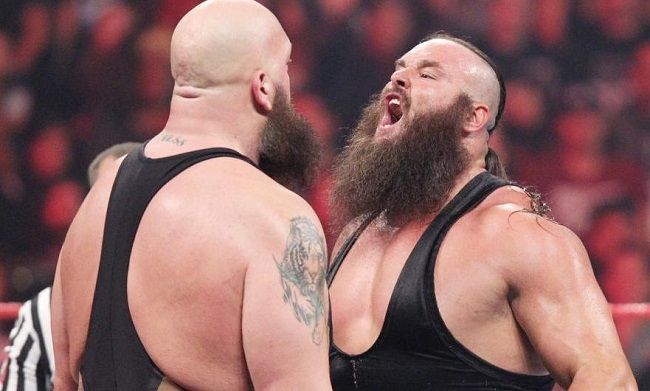 WWE is the best pro wrestling company in the world that features some of the world’s best wrestling stars but in recent times, the company faced hatred from the fans for releasing talents. WWE releases wrestlers for many different reasons and in 2022, WWE released superstars preliminary due to the coronavirus pandemic

WWE has released many big wrestlers during this pandemic including Big Show, Samoa Joe, Braun Strowman and the list is expected to continue for quite a while. Generally, WWE releases wrestlers due to various reasons such as budget cuts, wrestlers release demand or maturity of contracts.

Here’s the list of every WWE wrestlers released in 2022.

After his contract ended in January, Big Show and WWE parted ways. There was a new deal proposed even though Big Show did not continue with the company. Now, Big Show signed as both in-ring and commentary contract with AEW.

WWE announced on 4 February 2022 that the organization to release Steve Cutler(Forgotten Sons). After he caught COVID-19 in January, he allegedly faced heat from Vince McMahon.

In the month of January, Lars Sullivan was released from the WWE. Only after several news outlets approached WWE, word of his release came out. Later, Sullivan began no-showing at WWE TV Tapings in November, according to reports. This caused him to be discarded from all plans and eventually to be released.

In March 2022 Andrade requested the release from WWE. He has been off WWE TV since October 2022 and the WWE creative staff doesn’t seem to be planning for his future. A couple of days later, WWE released him. The release has been announced during the 2022 show Fastlane.

A bunch of 10 wrestlers were released on the 15th of April by WWE, Samoa Joe is being one of them. In late 2019 and early 2022, Samoa Joe experienced several concussions. He was not allowed for a comeback by WWE and he served as a commentator until WrestleMania 37.

Samoa Joe wanted to go back to work but was rejected by the WWE and dismissed last April 2022. On 10 February 2022, his last WWE match was the RAW show.

In recent months, after the team she was split from Billie Kay in September 2022, Peyton Royce been on and off from WWE TV. At the beginning of this year, she worked as a team partner for Lacey Evans, but she went on TV as soon as Evans pregnancy was confirmed.

In April 2022, WWE released her ex tag partner, Billie Kay as part of cutbacks in the budget and because they had no definite creative ideas for her.

Mickie James is not seen on WWE TV since the 2022 WWE Draft. In September 2022, James’ final bout was a championship match against the WWE RAW Women’s Champion Asuka. James incurred injured during this encounter and have not been seen ever since. So as part of the budget cuts in April 2022, James was released by WWE.

Chelsea Green made her debut on 13th November 2022 on the blue brand. Her last match in the company was at survivor series PPV, where she was injured. However, after she was back in March 2022 from injury. She was finally released in April as she was not utilised.

Tucker was also released on a budget cut from the company. He was part of the red brand where he turned on his tag partner Otis in the HELL IN THE CELL PPV. Later that he was found as a jobber and his last appearance was at Andre the Giant Battle Royal on 9 April 2022.

Kalisto was not used much on WWE TV and was only appeared on Andre the Giant Battle Royal. Resulting in a lack of creative ideas and budget cut by WWE, Kalisto was released.

Bo Dallas was not been on air since November 2019 Crown Jewel PPV. So after being inactive for years WWE made a budget cut and let Bo Dallas go.

As part of the Forgotten Sons in April 2022, Wesley Blake makes his debut in his first WWE roster. In the title match for the SmackDown Tag team at Money in the Bank 2022 PPV, he joined Steve Cutler.

After some courteous comments by Jaxson Ryker, the team was being pulled from TV. Blake and Cutler come back as Lona Wolf’s Knights in December 2022 but were taken off TV again after the release of Culter. In April 2022 Wesley Blake was released also by WWE.

Mojo Rawley went through a major character change in WWE but never been able to get the main roster push. His last match was in May 2022 where he lost to Shorty G. Due to lack of creativity for him Mojo Rawley was released.

Daniel Bryan’s contract with WWE ended after he faced WWE Universal Champion Roman Reigns in a career vs title match on the SmackDown episode of 30 April 2022. Bryan did not renew or sign a deal with WWE or any other business.

WWE Wrestlers Released in May 2022

On 19 May 2022, Velveteen Dream was released silently. As he was charged with seeking nudist images and sending them to smaller girls and boys inside the Speaking Out Movement. However, the investigation was made and not much was found against Dream.

As part of the budget cuts in May 2022, Jessamyn Duke was released from NXT. In 2018 she signed with WWE but was mostly one of Shayna Baszler’s sidekicks in her NXT run.

Vanessa was an active member of the NXT roster and was even rumoured to debut on the main roster but that never happened. Due to lack of appearance and other reasons, Borne was being released.

Skyler only wrestled twice on NXT shows and later was released for the company.

Ezra Judge was also released in May 2022 along with some other NXT wrestlers. In August 2019, he signed with NXT. The judge was formerly a pro-bodybuilder, although he competed in just two matches for NXT.

The release of Alexander Wolfe was unexpected as he had an excellent programme with Imperium. The last NXT outing of Wolfe was on 18 May 2022 against Killian Dain. In April 2015, Wolfe signed and worked at NXT till 2018 with WWE. He was subsequently called with Sanity stable to the main roster.

Wolfe returned to NXT UK where he started appearing with Imperium, after not having been seen much on the main roster. On Twitter, Wolfe informed that WWE concluded its contract on 15 June 2022 and that after that date it may also be published in additional promotions.

Kavita Devi was the first Indian women’s wrestler in WWE. She appeared on Women’s Battle Royal at WrestleMania 2018 and was also a member of the active NXT roster. It was reported she missed Superstar Spectacle PPV in India due to family problems. Kavita Devi was released on 19th May 2022.

Braun Strowman was released on 2 June 2022 from his WWE contract. Budget cutbacks were the reasons behind his release. Strowman has won the Universal Champion belt, Intercontinental Champion belt, Raw Tag Team belt, and is also the winner of the Royal Giant Battle Andre, Money in the Briefcase Bank, and the Royal Greatest Rumble.

The WWE did not perceive so much worth within him. Strowman was allegedly fired on account of its $1 million worth deal.

Black joined the NXT roster in 2017 and worked his way up to the main roster in 2019. Aleister Black was one of the upcoming talents but didn’t get a consistent push on the blue brand. Black was released on June 2 as a budget cut by WWE.

Ruby Riott was last seen as a tag partner of Liv Morgan where both were looking to get the Women’s Tag Team Title. She has been an active member of the Smackdown roster. It is believed, however, that Ruby wanted to leave the company for quite a long time.

Lana was released due to her lack of in-ring improvement. Earlier Lana acted as a manager for Rusev, but as Rusev left the company Lana was very inactive on WWE TV.

Buddy Murphy was also released due to a budget cut. Murphy has won the Cruiserweight Championship and RAW Tag Team Championship during his WWE career. He was active much on the shows lately and he was last seen against Cesaro in a singles match.

WWE was not utilising Santana Garret since she made her debut in NXT in 2019. Finally, WWE releases the Garret on June 2, 2022. She was meant to get the Main roster to call up but that never happened. The reason stated for her release was a budget cut by the company.