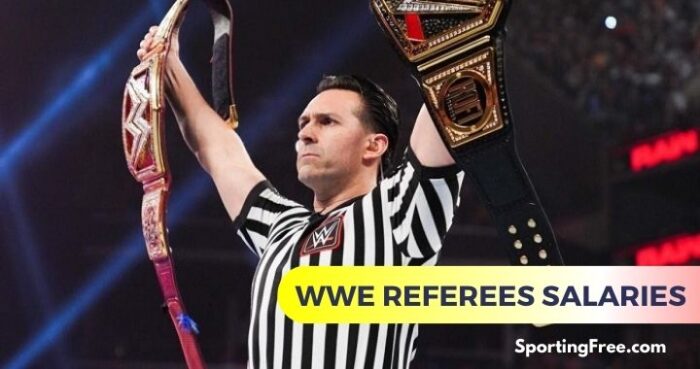 Referees in any sports are very reputed and respected elements. However, in WWE when it comes to the role of referees is totally opposite. But do you know How much does a WWE referee make per match? What is the actual role of a WWE referee in the ring? Who is the highest-paid referee in WWE?

Remember the Montreal Screw Job? For those who don’t know, Brett Hart was forced to lose his title by Shawn Michaels after Shawn Michaels was wrongly declared the winner due to wrong referring.

Basically, the referee messed up! And we all thought that they had one role of just counting one, two, three and that too they goofed up. But that was not the case, do you know referee in a WWE poses a much bigger role than that. Thus, they are paid handsomely by Vince McMahon for their secret role.

WWE might not be a sport as they are an entertainment company but still, the referees are one of the highest-paid referees in the world.

What’s surprising to see is that WWE referees are paid higher than UFC, Boxing, and Kick-boxing referees.

While all the referees don’t earn the same. As those officiating Wrestlemania and bigger main events are paid higher.

Mike Chioda was the highest-paid WWE referee this year, and rightly so with 25 years of experience under his belt, However, what came as a shock was his recent release from WWE.

One thing sadly WWE proudly glorifies is the wage difference among the gender as Jessica Carr is the only female referee in the industry and is paid only $500 per match compared to Ryan Tran who makes $1,500 per match.

You must be thinking that WWE stands to wrestle without rules! Yet they have a dummy like a figure in the ring in black and white strips looking after rules and just count till 3.

However, you will be shocked to know that a referee in WWE posses a secret role that is they are the ones who have an earpiece in their ear connecting with backstage who passes instructions to the referee and then referee passes them on to the wrestlers.

Instructions such as to finish the match quickly or to perform a particular move. It won’t be wrong to say that they are the script coordinator in the ring.

They also hold the power to order dimming of light in the arena in case of an actual injury. Thus a referee acts as a communicator between the wrestlers and backstage.

Remember the time when you and your siblings used to fake wrestle enacting WWE characters such as John Cena, Undertaker, Triple H, and many more. Adapting their gimmicks and maneuvering their signature moves to winning the homemade title by pinning or submission. We have done it all! Haven’t we?.

WWE was not just a weekly entertainment show where we loved seeing our favorite wrestlers take on each other. In fact, WWE was pure craziness and a set of emotions in every viewer’s life.

However, while growing up the realization of the shows being scripted is something to debate on. But if there used to be one question in every WWE fan’s mind was ‘what is the role of the referee in the ring?’

I hope now you have got the clear idea why WWE referee is important in the ring and why WWE referees paid a higher salary than other sports referees.