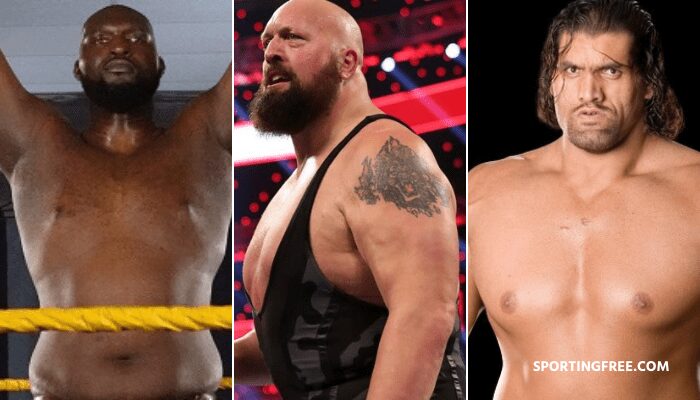 Who are the biggest and tallest superstars in WWE history? Let’s find out.

In the course of the years, WWE Giants, over the mark of 7 feet, had made names for themselves in the ring, not only by their humongous height but also by the in-ring performance. Here’s a list of the 10 tallest wrestlers in the WWE.

He’s one of the finest wrestlers globally, Mike William, widely known as The Dead Man. The success of Undertaker in WWE has strengthened his position among the biggest in the business as multiplicity WWE-World Heavyweight Champion, six-time team championship holder and Royal Rumble match winner in 2007.

On 22 November 2022, the Deadman retired, appropriately debuting at the same event and precisely 30 years before he first got into a WWE ring. His incredible careers eventually ended on the Survivors Series PPV. He is still the biggest and one of the tallest wrestlers in WWE history.

Robert Maillet is a 6’11 former wrestler and a Canadian actor known for his tenure in WWF, now known as WWE.

When he returned to the US in 1997, Robert was signed to join the WWF as a member of the wrestler group named The Truth Commission under a new ring identity. Robert participated in the Royal Rumble in 1998 but shortly resigned for a few months.

He returned to The Oddities in the new formation of The Jackyl. He is a two-time holder of the Extreme Canadian Heavyweight Wrestling Championship in British Columbia.

Big Show made an in-ring debut in 1995 after defeating Hulk Hogan in the WCW World Championship, which impacted WCW. The 7-foot tall American is one of the active tallest WWE superstars. He is the only guy on this list to hold all four titles in his career at least once.

He also manages to get titles like Intercontinental, U.S., and hardcore championships, WCW Heavyweight title twice, and WWE Championship thrice. It was evident from the start that he would have a strong career.

William Morrissey, aka Big Cass, is 7 feet tall former WWE wrestler born in Queen’s, New York. Cass was paired with Enzo when he made his main roster debut.

He may have made his bones in a tag team division, but very shortly, he realised that the limelight wasn’t as large as possible, so he turned heel on his former tag partner. And went on to the singles division, where he wasn’t as successful as he wished to be.

Kane started his wrestling career around 1993-1994. Kane’s career was characterised by brutally woeful and outstanding battles in the ring with the likes of The Undertaker, “Stone Cold,” Steve Austin, Shawn Michaels, Edge and more.

He has won the WWE Champion, World Heavyweight Champion and ECW Champion and also been tag team champs with near-unprecedented partners. Kane was one of the most successful wrestlers, the 7 foot high monster in the ring.

The Great Khali is a professional Indian-born American wrestler and ex-World Heavyweight champion. His real name is Dalip Singh Rana, and he is the first Indian to win a WWE World Heavy Weight Championship.

The Punjabi Sultan is 7’1″ feet tall and one of the tallest WWE wrestlers to make its way to the scene.

Paulo Cesar da Silva is an ex-national basketball player for Brazil. In 2014 he was named among the six tallest wrestlers in the world. Paulo is famously known as Giant Silva in the wrestling world is from the Attitude Era.

He was a part of the infamous Oddities faction, which also included Fellow giant Kurrgan. However, with the brilliant exceptions from him, he might not have left the mark that other tall individuals managed to leave in WWE during his tenure.

The tallest active WWE superstar in this list will not come as a surprise to many WWE fans. Omos is one of the biggest superstars ever in the organisation, the existing RAW Tag Team Champion. He has been a bodyguard for a long time, not actually wrestling.

He was the bouncer for those meetings in the RAW Underground portions. However, he stayed off WWE TV for a long time until they were finished. When he resurrected, he became the bodyguard along with AJ Styles.

He debuted recently as part of a WrestleMania tag team match with AJ Styles, and the two of them won the championships for RAW Tag Team.

The French Wrestler Andre Rene Roussimoff, often referred to as Andre the Giant is 7ft 4inches tall due to his gigantism. He one of the best wrestlers, who had his most important match during 1980 with the name “The Eight Wonder In The World” with Hulk Hogan, which he went on to win.

Andre The Giant is included in the WWE hall of fame for his remarkable career. He wasn’t just known for his humongous height but also his larger than life personality.

Eight-foot tall Giant Gonzalez has been a professional wrestler and a basketball star. In 1990 Giant Gonzales made his debut in ECW as El Gigante. With ECW, Giant Gonzales entered the main event scene after a few months with the organisation.

Later in 1993, he had his official WWE debut at the Royal Rumble PPV event, where he tossed The Undertaker out of the ring and eliminated him. Gonzalez is the tallest WWE wrestler ever. He had a good WWE run and had Harvey Wippleman as a manager.