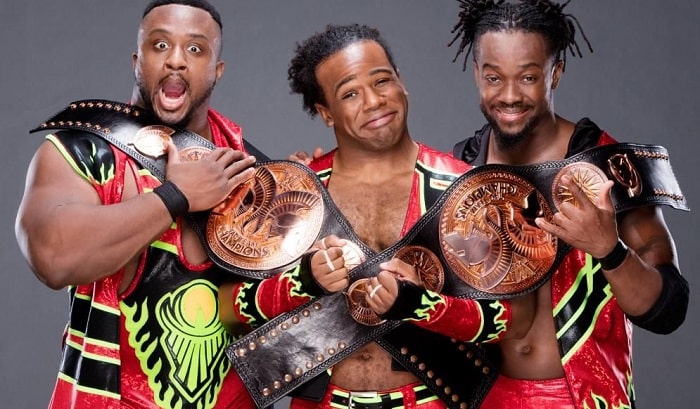 WWE recently featured five episodes of the greatest tag teams of all time on the Peacock network. The promotion revealed the list of the top 50 greatest WWE tag teams, and The New Day featuring Big E, Kofi Kingston, and Xavier Woods have ranked No.1 that shocks all hardcore WWE fans.

The No.1 on the list of WWE’s greatest tag teams ever are the 11 times WWE Tag Team Championship the NEW DAY (yes, it is). The New Day was formed in 2014 by Big E, Kofi Kingston, and Xavier Woods. They might come as a shock to fans being #1 on the list, as even mentioned by Big E via a Twitter post.

The Tag Team of Big E, Kofi Kingston, and Xavier Woods have all the points to be the greatest of all time. Their in-ring charisma, mick skills and ability to get the audience pops both as heels and face.

The New Day were also the longest reigning tag team champion in WWE history with 483 days. The New Days recently split up as Big E was drafted to Smackdown and both Kofi and Xavier Wood remain on Raw.

The Hardy Boyz: The Hardyz were one of the few teams who might be regarded as high fliers on our list. They are one of the rare teams on the roster where both guys went as individual stars in successful campaigns beyond the tag division.

Everywhere they went, the Hardy Boyz had the championship belts. They have managed to become twelve times tag champs between their WWE, ROH, and TNA careers.

Hart Foundation: The Hart Foundation, Bret Hart & Jim Neidhart with Danny Davis and Jimmy Hart as managers were some of the greatest tag teams in the World Wrestling Federation (WWF). Jim “The Anvil” Neidhart, already managed by Jimmy Hart, joined his brother-in-law Bret “Hitman” Hart to establish the Hart Foundation in 1985 as a heel tag team.

The Tag Team of Bret Hart & Jim Neidhart was ranked #37  of “The 100 Best Tag Teams” in the year 2003 by Pro Wrestling Illustrated. They were two times the WWF Tag Team Championship and were included in the WWE Hall of Fame in the Class of 2019.

Edge & Christian: WWE sees Edge and Christian as one of the best tag teams in the history of the organisation. They originally collaborated as members of The Brood from 1998 and 2001. In their second phase, as tag teams from 2009 to 2011, they achieved their greatest success. They have held the WWE tag belts seven times.

Perhaps they are the most comprehensive team on our list. They were amazing with the microphone, they could walk into the ring, and they were great as face or heels. Both guys went on to be World champions in WWE after accomplishing in the tag division.

The Dudley Boyz: Bubba Ray and D-Von Dudley are probably the most decorated WWE tag team in winning titles with major companies. They performed with several big organisations, including ECW, WWE and TNA, where they captured tag team titles twenty-three times. They are included in both WWE and TNA Hall of Fame.

The Dudleys have played an important role in popularising hardcore wrestling in the tag team division and beyond, especially with their usage of tables. The WrestleMania X-Seven match, which included Hardy Boyz and Edge and Christian, was probably the biggest day match.