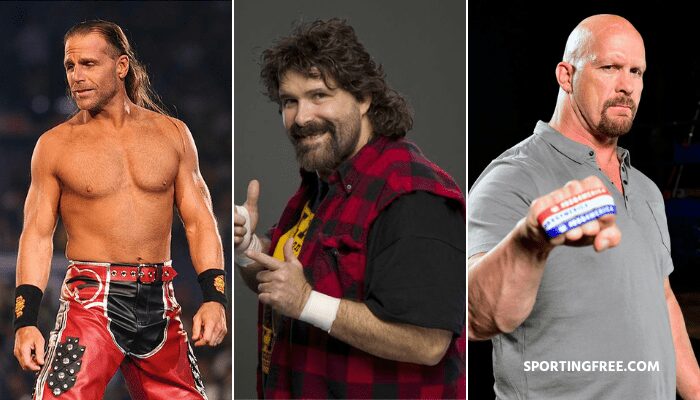 WWE has generated many greatest superstars over the years through the Golden Age to Attitude Era and PG Era to the New Era.

Honourable Mentions to the Superstars couldn’t make a list of the greatest WWE superstars of all time below but will always be fans greatest WWE wrestler.

Steve ‘ Stone Cold’ Austin 316, without a doubt, made the top in our list of the greatest WWE superstars. The middle finger poser to those who dare to oppose him. Stone Cold is the most well-known WWE wrestler in the 1990s, earned major popularity as a heel who frequently opposed the system and its leader, Vince McMahon, who was arrogant and profane.

One of the finest wrestlers in the square circle is the Heartbreak Kid. Shawn Michaels would always perform an A+ for fans, whether it was feuding with Razor Ramon, Bret Hart, Kurt Angle, John Cena, or The Undertaker. Michaels is the most gifted sports entertainer, his entrance music is one of the best there ever was.

Shawn has won the Intercontinental and European championships throughout his career and was four times world heavyweight champion. Michaels is a two-times WWE Hall of Famer.

The Rock is the most successful WWE superstar in the world, without any doubt. The People’s Champion has been 8x WWE Champion. He had eleven world champions, two intercontinental champions, a five-time tag champion, and a Royal Rumble winner in the ring.

He fought most against Hall of Famer Stone, Steve Austin, and his wrestling feud, as they headlined together three WrestleManias. The Rock is currently inactive in the ring, mostly focus on his Hollywood career. However, we might see the return of Dwayne “The Rock” Johnson anytime in the future.

From his debut in the WWE to his triumph at WCW with the New Industry Order, Hulk Hogan is one of the cornerstones of the wrestling world. In the 1980s, Hogan was the world’s most well-known wrestling star and the most popular WWE wrestler.

With icons like Andre, the giant, the final warrior, Ric Flair, and Rowdy Roddy Piper, Hulk had one of the greatest matches of all time. Hulk also dubbed his Hulkamania and has been a 6x WWE Champion.

The Nature Boy is the best WWE wrestler of all time. He spent 40 years in the wrestling profession. The WWE recognizes Flair as a 16-time world champion; however his world title range ranges between 16 and 25.

His skill for millions of fans was presented, although Flair was at best behind the mike. Nobody was better to praise his own grandeur and wealth while screaming.

There was a time when Flair didn’t burn through stadiums like a flame of charisma, but that was before he discovered his destiny as “The Nature Boy.” Before stealing kisses, travelling on planes, and riding in limos, the 16-time World Heavyweight Champion was an adopted, brown-haired boy in Minnesota with a chip on his shoulder.

Undertaker made his debut on the 1990’s Survivor Series. He’s a 7 times Heavyweight World Champion, a 6 times tag team champion, a Royal Rumble winner, most of which are renowned for his undefeated WrestleMania streak. Undertaker is one of the greatest WWE superstars ever.

In the penultimate instalment of WWE’s Last Ride documentary, the company announced earlier this year its retirement.

His last game at WrestleMania 36 was against AJ Styles. The first Casket match in the survivor series, the first-ever Buried Alive game in 1996, and the initial Cell Match Hell in October 1997, The Deadman has been a part of numerous WWE firsts.

John Cena’s a 16-time WWE Champion, a 5-time US Champion, and a 4-time Team Champion. For the most renowned world title reigns at 16, Cena is on the tie with Ric Flair. He is the New era’s superstar and children’s favourite WWE wrestler.

Cena is well known for his entrance, five knuckle shuffle, AA finisher, and you can’t see me pose. Cena has an estimated net value of £42 million and is now entered into a partial-time agreement for £7,6 million a year with the WWE.

When Macho Man joined WWE in June 1985, his services were required by several WWE managers. But Savage was introduced to the ring and managed by a young woman called Elizabeth. With his first manager, the First Lady of Wrestling, the first big achievement of the Macho Man came in 1985 wrestling classic PPV.

Piper began his WWE career as one of the most loathed wicked guys ever. After making his bones in the North West West African Republic in the late 1970s, the Hot Rod arrived at the WWE in 1984. He became a WWE pillar and regularly took part in hot interview segments, one of the companies’ most entertaining.

For Piper, WrestleMania III was a momentous evening, as it was his last match before a short retirement. Then utilizing a Hold Sleeper, Piper beat Adrian Adonis and shaving his rival added to the humiliating loss. The Silverdome exploded with Adonis’ locks shaved, gaining Piper an ovation of its greatest.

Piper returned to the promotion by winning the Intercontinental Championship at the start of the 1990s and earned his first taste of the gold championship on January 19, 92. He fought Bret “Hit Man” Hart in another great bout for WrestleMania VIII, losing the gold, but still a popular fan.

In 1996 when Mick entered the WWE, he became the Mankind, a crazy misbeliever who lurked in boiler rooms and shook his fingers in the necks of his opponents. Mick Foley deserves to be one of the greatest WWE superstars of all time.

Under this maniac’s leather mask, Foley was in the most shocking moment of sports entertainment when the undertaking was hurled away from the top of hell in a cell.