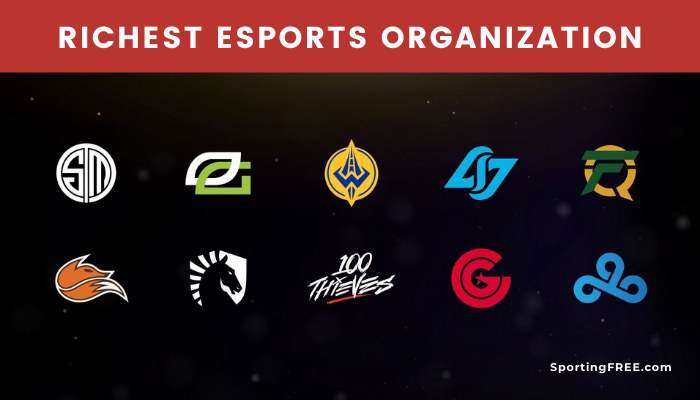 The Gaming and Esports Industry is one of the Fastest Growing Businesses in the entire world and is expected to reach a market value of 300 Billion USD by the end of 2030. The main reason for the tremendous growth is often attributed to the Esports aspect of games. Top companies and brands around the world have heavily invested themselves in the popular Esports Organization which has increased the overall brand value of certain Esports teams as Organization. The below list represents the top 10 most valuable and the richest Esports organizations in the world.

T1 is a South Korean-based Esports Organization that is quite known for its League of Legends and Dota 2 teams. Over the years the organization has slowly expanded from Leagues of Legends into other mainstream titles.

Currently, they have an active rooster for more than 10 different games including Overwatch, Apex legends, Valorant, and PUBG.

NRG Esports is one of the newest American Esports organizations that was found in 2015. They quickly rose to fame with their CS GO team and slowly ventured to other titles like Smite, Rocket League, and Overwatch. Currently, the Team is quite popular and strong in Apex Legends and is termed as one of the strongest teams in the community.

The company was founded by Mark Mastrov and Andy Miller when the NBA member wanted to open a business in the gaming industry. The Major partners of NRG are popeyes, Herman Miller, and Turtle Neck. The company is currently valued at 155 Million USD in the international market.

G2 Esports is a European-based Esports organization that was founded in 2014 and its headquarters is located in berlin. They are one of the most heavily backed companies in terms of both money and support from Europe.

G2 CS GO rooster is one of the best teams in Europe and has won so many titles. They were also quite known for their Paladins, Hearthstone, Valorant, and Fortnite teams.

They have partnered with other major companies like Lenovo, Logitech, Aorus, and Adidas. G2 Esports was currently valued at 175 Million USD and stand eighth on the list of richest esports organizations.

Enthusiast Gaming is an Esports Online Media Outlet as well as Esports Organization. Luminosity Gaming, Vancouver Titans and Seattle Surge all are owned by EG. EG was found by Menashe Kirshenbaum who is a Canadian Entrepreneur.

EG also owns the gaming news and review website Destructoid. EG is quite well known for its Call of Duty and Overwatch Team. They are currently planning to expand into Mobile gaming and looking to expand in Asia. They are valued at 180 Million USD.

Gen G Esports is a Korean-based Esports Organization that was formerly known as KSV Esports and has its headquarters in Seoul, Shanghai, and Santa Monica. They started out with Mobile Esports and slowly moved towards PC titles.

They are quite known for their Overwatch, PUBG, and Apex Legends roster. They are currently partnered with famous brands like Mcdonalds, LG, Bumble, and bank. Forbes estimated Gen G at 185 Million USD.

100T is one of the newest Esports organization on the list and have risen quickly to the top of the gaming biz. It was founded by Matthew Hagg who is an ex COD professional player.

They are not only famous for their Esports Personalities but also boast a long list of famous Streamers. 100T is best known for their Valorant and Fortnite teams.

The 100T Valorant roster won the inaugural VCT Championship. 100T recently went through an ownership change and is estimated at 190 Million USD.

Faze Clan claims itself as an Esports and Entertainment. True to its claim they are a bit of both glam and gameplay. FaZe rose to fame during the 2017 and 2018 Fortnite Era when they featured a lot of Fortnite players and streamers.

They are one of the biggest esports organizations and has partnered with brands like Nissan , Wix,Steel Series and Manchester City . CS GO ,Call of Duty , Fortnite and FIFA are some of the games in which FaZe clans excels at.

The CS GO roster of FaZe is considered one of the best in the world at the moment. Forbes has estimated FaZe clan at 305 Million USD

Team Liquid is one of the oldest Esports organization on the list found in 2000 and is based out of the Netherlands as well as the USA. The parent company of Team Liquid is Axiomatic gaming which is partially owned by the NBA superstar Michael Jordan.

One of the most valuable esports organizations, Team Liquid are currently partnered with companies like Alienware, Honda, Twitch, and HyperX. Being a very Old Esports Organization they were famous for lots of games like COD, Dota 2, CS GO, and Rocket League.

They also similar to TSM started out as a news and tips website for Starcraft and in 2012 announced their first team for Dota 2. They are currently valued at $310 Million USD.

Cloud 9 is often called the “Pride Of American Esports” and is based out of California. Found in 2013 they first started their journey in CS GO and expanded to other titles like Leagues of Legends and warcraft.

The big Investors and partners have Increased the overall brand value of Cloud 9 who is currently the world’s second-richest esports organizations, valued at 350 Million USD.

The richest esports organizations, TSM started out as a social community website for League of legends players where guides, trips, and tricks were provided. In 2011 they started fielding their own LOL team in professional matches and TSM was Born.

The organization is also building the world’s biggest and costliest Esports gaming house for 50 Million USD. TSM is partnered with companies like twitch, Logitech, and Lenovo.

TSM is currently the most valuable esports organizations in the world with a value of $410 Million USD and is projected to be valued at 500 Million USD by the end of this year.

Disclaimer: All the facts and figures about the 10 richest Esports organizations are based on analysis, research, interviews, official statements, reliable sources, and reports released by trusted sources.