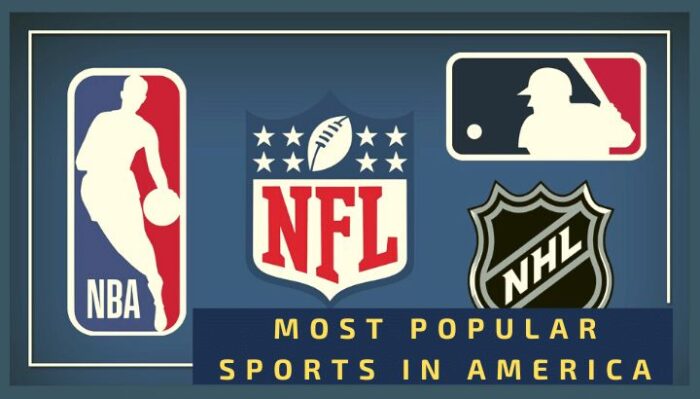 Sports is not only a favourite pastime but a massive part of the American culture and today we look at the most-watched and most popular sports in America. These games act as a medium for transmitting essential values such as justice, fair play, and teamwork. According to a recent survey, about 63% of the total USA population are fans of at least any one sport. Whether it be professional sports or college/school level sports, people are always passionate about it.

Over the ages, America has ever produced a lot of big names like Michael Jordan, Muhammad Ali, to Michael Phelps, Lebron James, and Floyd Mayweather in the Sporting World.

Most Popular Sports in America

Americans are very enthusiastic about their favourite sports and favourite teams; they always show up in huge numbers to support their team. In this article, we will analyse the 10 most followed sports in America.

Wrestling is undoubtedly one of the most popular and most-watched sports in the United States of America. World Wrestling Entertainment commonly known as WWE, it is deemed as the hilltop of professional wrestling. WWE has raised several Superstars like John Cena, Triple H, the Rock, and The Undertaker, and also helped them make a future in Hollywood too, the sport has attracted and inspired millions of people since their childhood days.

Motor Racing is one of the most-watched sports in the US. The NASCAR auto racing championships gathers an audience of up to 20 million fans. Some of the World’s renowned international races like the Indianapolis 500 also known as Indy 500 and the Daytona 500, also known as “Great American Race” are organised by NASCAR. One thing we all know is Americans love fast cars, and they are much more fond of the speed the vehicles reach than the players in this sport.

Muhammad Ali, The Greatest boxer of all-time is American; The legendary player is the greatest fighter the sport ever saw and still praised all over the globe for his valuable contribution to the sport’s popularity. Some of the wealthiest and most successful, top boxing superstars like Floyd Mayweather, Mike Tyson, Marvin Hagler and Ray Robinson are from America.

Floyd Mayweather had brought entertainment to the sport with his pay per view matches and Unbeaten streak. Regardless, nowadays, people prefer Mixed Martial Arts/ MMA over the usual boxing.

MMA is organised under the (UFC) Ultimate Fighting Championships. Though there aren’t many American superstars on this path, it is currently one of the fastest-growing sports in the USA. Players like Conor McGregor, Deontay Wilder, Khabib, Ronda Rousey are enhancing great value in the promotion of the game. Last year, UFC managed to price up to four billion of revenue, which is highest in the history of sports.

Golf is the 7th most popular and publicly acclaimed sport in the USA. Though Tiger Woods had attracted controversies and scandals during his time, we have to admit the fact that Tiger Woods at his peak took golf to an entirely new level.

The United States is considered as the heartland of the sport, and the country is home to numerous beautiful golf courses. Golf is one of America’s favourite pastime and remains highly uplifting and satisfying for the viewers

Presently, half of the top ten ranked golfers on the PGA tour are Americans, like Dustin Johnson at # 1 and at #3 is Jordan Spieth.

The next sport on the list is Tennis; the sport is equally popular in both men and women. Current players like the Serena sisters, Andy Roddick, Pete Sampras, Andy Roddick and  Andre Agassi have boosted the popularity of the sport in America by creating outstanding career records.

The US Open is one of the most illustrious tournaments in Tennis where players from different countries compete and it is hugely awaited by tennis followers worldwide each year. Tennis currently is one of the fastest-growing sports in America. Tennis is still one of the most famous and adored games in the country due to its rich history.

For a long time, soccer or widely known as football was popular around the World but not much in the United States. Football is the most popular game all over the World with more than four billion fans, but it ranks 5th in most popular sports in America. Premier League is the world’s 3rd most watched sports.

After the appearance of the US National Team in the FIFA World Cup 2014, the sport has gained a lot of fans in America. The highest level of soccer in America is Major League Soccer or MLS.

Ice Hockey is the 4th most popular sport in the US. It is typically known as “hockey” in the nation; the name “ice hockey” is used in countries where “hockey” commonly refers to field hockey. In the United States, National Hockey League (NHL) is the topmost level in ice hockey and home to plenty of youth talents mostly from Canada and America.

NHL Stanley Cup games in the US was viewed by 5.33 million fans in 2019, which is the second-highest in NHL in past five years.

The USA won its first Gold Medal in the Winter Olympics in 1960. Hockey has today become one of the favourite indoor sports to pass the time. The New York Rangers is the most popular team in NHL, their home arena Madison Square is known as the Mecca of Sports.

Basketball is one of the most loved and the third most popular sport in the USA with approximately 14,000 attendance per match, and it is also the 10th most followed sport in the World. The National Basketball Association (NB competitions organises all the Basketball Competitions in America.

NBA has generated some of the greatest basketball players in history like Micheal Jordan, Kobe Bryant, LeBron James and Stephen Curry. Michael Jordan took the NBA into another level. With about 27 million players, Basketball has received a lot of attention and fan following in both professional as well as college level. The NBA Finals also gained an average of 8.8 TV rating.

Baseball is the second most popular and widespread sport in America and is the 7th most popular sport around the World. It is a sport that goes on to amass notable attention from American sports lovers. Baseball is considered America’s national pastime. The Major League Baseball is a star-studded league and features a lot of remarkable, talented players.

MLB registered an average of 198,000 viewers in the 2019 season. The sport was invented in America around 150 years back. If you look at a historical and cultural perspective, then baseball is the most valued sport in the country.

The New York Yankees, commonly known as ‘Yanks’ are the most successful and endorsed baseball team of all time in America.

The Super Bowl is the most anticipated and awaited game in America every year. Even the Super Bowl’s halftime performances are more popular and addressed than the NBA Finals.  Whether it be local high school, college football or professional football, the game draws millions of spectators all over the country.

NFL quarterbacks like Joe Montana, Johnny Unitas, Dan Marino, Tom Brady and Brett Favre have a huge fan following in America and are some of the most popular sporting personalities in America.

The NFL presently has the highest TV viewership subscriptions and match attendances in the US.  This year the sport saw an average stadium attendance of around 67,000 per game. American Football, mainly NFL, is followed by almost every American and is a prime topic to spark a conversation at gatherings.