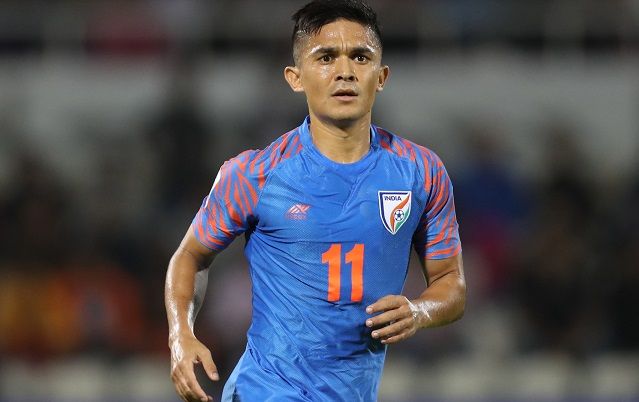 Most Famous Indian Football Players of all Time

Though India is a cricket-loving nation, football is becoming a popular sport in the sub-continent nowadays due to young fans. India has not performed very well on the international stage, but now things have started changing after introducing the country’s premier football tournament Indian Super League which feature some of the most famous Indian football players. Currently, India stands at 160 on the FIFA international rankings.

India is home to a lot of great footballing talents and legendary players. Here are the most famous Indian football players of all time and their spectacular career serving the Indian National team.

The Indian Captain has been the flag-bearer of Indian football in recent times, frequently appealing to fans to come in numbers and watch football matches in stadiums. Sunil Chhetri is currently the best Indian football player. He was born in Secunderabad, and he is second to Cristiano Ronaldo in the list of active international goalscorers with 72 goals and slightly ahead of the Argentine Lionel Messi.

Sunil Chhetri started his professional career at one of India’s oldest clubs Mohun Bagan and then transferred to JCT F.C. (Jagatjit Cotton & Textile Football Club), where he scored 64 goals in 100 appearances. The prolific forward gained recognition for his goal-scoring talents in 2010 when he got an offer from USA’s Major League Soccer (MLS) side Kansas City Wizards, to which he officially agreed.

Chhetri also got an opportunity to play in Europe when Sporting Portugal’s B side signed him, but he got frustrated and left the club after two years due to a lack of chances to showcase his skills.

He then returned to India and joined Bengaluru F.C. Chhetri, their Most capped Player and highest goalscorer for the Blues, and led them to win 2 Hero I-League titles, one ISL title 2 Federation Cup titles, and a Super Cup. Chhetri is the Indian National team captain and is known as “Captain Fantastic” for his match-winning performances and goal-scoring prowess.

For a long time, during the late 90s and 2000s, Bhutia was the sole torch-bearer of Indian football. Born in Sikkim on December 15, 1976, Bhaichung Bhutia is one of the brightest and talented finds in Indian football. Bhutia and fellow teammate Vijayan were a lethal combination of forwards for India; they had a unique understanding and passing chemistry.

In fact, Vijayan once said, Bhutia was ‘god’s gift to Indian football. He was the best Indian striker of his era, and fans had named him the Sikkimese Sniper for his extraordinary shooting prowess. Today also he is one of the most popular football players in India.

Bhutia started his career with East Bengal F.C. made his debut for India at the age of 19. He has officially played 84 matches and scored 40 goals for India in his international career. Bhaichung then became the first Indian footballer to sign a contract with a European Club when FC Bury, an English 2nd division team, signed him in 1999.

He made over 30 appearances for Bury then was released after the club faced bankruptcy. He also played for Perak F.A. and Selangor M.K. in Malaysia.

He has won several trophies wearing the Indian jersey, including the Nehru Cup in 2009, where he was named the Player of the Tournament. He has also conquered the SAFF Championship three times and the AFC Challenge Cup.  Baichung Bhutia dropped his jersey and retired in 2011 after serving the country for so long.

As an honour for his contributions to Indian Football, a farewell match was organized against Bayern Munich at New Delhi on January 10, 2012. Bhaichung Bhutia also has a football stadium named after him and several Football Schools for kids and teenagers aspiring to play for the nation.

One of India’s Most versatile strikers, I M Vijayan, popularly known as Kalo Harin (Black Buck), was a former captain and professional footballer for the Indian team, born on April 25, 1969 in Thrissur, Kerala. Fans called him the “Black Pearl” of Indian Football. Vijayan made his debut for the Indian team in 1989 and picked up the sport at the age of 17, playing for the Kerala police; he then joined JCT F.C. for two years and moved to East Bengal Club in 2005.

He has scored 40 goals in 79 appearances for India and led the Indian team’s attack in various tournaments like the Nehru Cup, SAAF Cup, and Pre-Olympics. He was given the title of `Best Indian footballer of the year` in 1993, 97 and 99 by AIFF, and was the first football player from Kerala to be honoured with the Arjuna Award in 2017 received from the Ministry of Youth Affairs and Sports.

Though he retired early, he was the wealthiest Indian footballer in his era and was known for his extraordinary acrobatic shots, agility, and lightning-fast pace. He had also scored the 3rd fastest International goal ever, in just the first 12 seconds of a match against Bhutan in the 1999 South Asian Football Federation Cup.

Popularly known as Sailen Manna, a solid defender was the former captain of the Indian team. He was a great leader, led the country to the inaugural Asian Games gold medal in 1951. And was a vital part of the team that took part in the 1948 Olympics. Manna was the captain of the Indian team in the 1952 Olympics, and he was honoured with the Padmashree awards in 1971.

His heroics as a captain were so well acclaimed that his name was shortlisted by the English Football Association in the list of the ten best captains of the world in 1953. Sailen played his club football for Mohun Bagan his entire career of 19 years. He received the Mohun Bagan Ratna in 2001

The legend passed away on February 27, 2012, aged 87. Over 2000 people, including the Chief Minister of West Bengal, walked for 4 km to the crematorium to commemorate his funeral.

Currently, Sandesh Jhingan is the Hot topic in Indian football and one of India’s most popular football players. The 26-year-old is a formidable defender who plays at the centre back position for Kerala Blasters and the Indian National Team.

Jhinghan is the captain of Kerala Blasters, has also captained the Indian team in the absence of regular captain Sunil Chhetri. He is the upcoming star of Indian football and also one of the most famous Indian football players of the current era.

He also played for the Chandigarh state team at the Under-19 level. He came into the limelight after his spectacular performance in a game against Kenya, which was apparently Indian Legend Sunil Chhetri’s 100th appearance; he maintained the backline and restricted the pacy Kenya strikers to score any goals. He received his football training from the St.Stephen’s Academy.

Gurpreet Singh Sandhu,  India’s first-choice keeper, also popularly known as” The Great Wall of India”, is a phenomenal keeper who plays for Bengaluru FC. Sandhu is the first Indian player to play for a top-division European club in a competitive match and the fifth Indian to play professionally in Europe.

Jeje Lalpekhlua is a young Indian footballer and plays for both Chennaiyin F.C and the Indian national team; he is the second-highest goalscorer in the ISL. He gained a lot of popularity and love in 2015 when he won the I-League with Mohun Bagan and was named FPAI football player of the year.

I hope you liked our list of the most popular Indian football players. If you have some suggestions or disagree with us, comment below with your favourite Indian footballer or your version of the same.