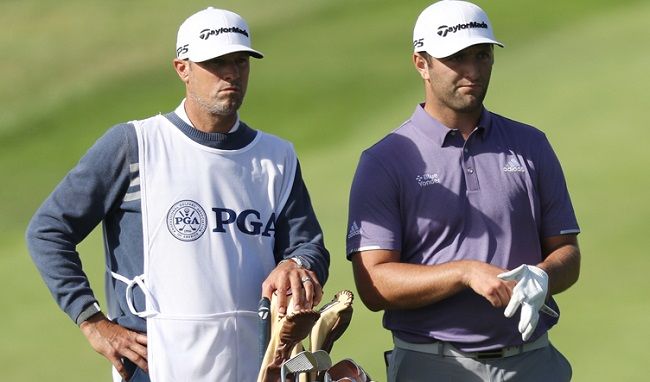 The PGA Tour features best golfers in the world who earns a lot of money. Here we present the highest-paid Golf caddies in 2022 based on the last season’s PGA Tour.

A golf Caddie is a golfer’s sidekick for our fellow readers who don’t know what a Caddie or Caddy means. A Caddie basically is the person who carries a player’s bag and clubs and gives useful advice and moral support to the golfer.

A good caddie has thorough knowledge regarding the challenges and obstacles of the golf course being played. A good Caddie will also suggest the best strategy in playing on a particular Golf course, pin placements, and even club selection for shots.

Caddies are similar to and as valuable as managers, coaches, and trainers in various team sports like football, cricket,etc., Thus they are also paid very well.

Albin Choi was a Caddie for Korean Golfer Im Sung-Jae. They both share a solid friendship as Im won his first-ever PGA Tour event last year. Albin has quit as a professional Caddie to become a Professional Golfer.

The Australian pair Matt Kelly and Marc Leishman have been partners since teenage as both found a liking to Golf. Matt has been a Caddie for Marc for a long time.

Josh Cassell is currently caddying for Daniel Berger, who performed well in 2022 and shot up in the PGA Tour Rankings.

Josh has been caddying since 2000 and has carried the bag for professionals like Geoff Ogilvy, Billy Horschel, Jason Dufner, John Senden, Paul Gow, and Aaron Baddeley.

Kessler Karain is the caddie to the world-class golfer Patrick Reed. Last year Kessler came into bad light after being banned from the President’s Cup for shoving a spectator after a heated banter.

Karain is actually the brother of Justine Karain, the wife and former Caddie of Patrick Reed. Kessler’s PGA Tour Purse is $226,500, along with that, he also earns a base salary of $120K, making it $346,500 in overall payouts as a Caddie.

Tom Tucker carries the bag as a Caddie for the 26-year-old Bryson DeChambeau, who has had a successful start to his career so far.

Jon Rahm has risen to the top of the PGA Tour leaderboard to become one of the best professional golfers globally. It is also partly with insightful help from his Caddie Adam Hayes. The pair went pro in the 2016 U.S. Open and then became world number one in 2022.

Paul Tesori and Pro Golfer Webb Simpson have one of the strongest and longest player-caddie relationships. Together they have won the 2012 U.S. Open, the 2018 Players Championship and 23 PGA Tour wins.

Austin is Dustin Johnson’s Caddie and younger brother; they have been together since 2013 and one of the most successful brothers in Pro Golf. Dustin and Austin together have won nine tournaments, including Dustin’s first major at the 2016 U.S. Open at Oakmont, which crowned Austin as PGA Tour Caddie of the Year for 2016.

Austin’s PGA Tour Purse is $352,600, along with that, he also earns a base salary of $120K, making it $472,600 in overall payouts as Dustin’s Caddie. According to Forbes Magazine, Dustin was the second highest-earning caddie on the 2017 PGA Tour.

Jonathan Jakovac currently carries the bag for young star golfer Collin Morikawa, who has bagged three PGA Tour victories, including the PGA Championship title. Jakovac himself was a golfer a long time back but couldn’t make it big and was a caddie for fellow American Ryan Moore for seven and a half years. Jakovac’s PGA Tour Purse is $366,825, along with that, he also earns a base salary of $120K, making it $486,825 in overall payouts as Collin’s Caddie.

Jimmy Johnson has been carrying the bag for one of the world’s best professional golfer Justin Thomas. Thomas has had a great career so far and has risen to the top ranks quite often in the past years.

He has managed to win 13 PGA Tour titles. Johnson is one of the most experienced and respected caddies and has been caddying since 1995 for almost 25 years.