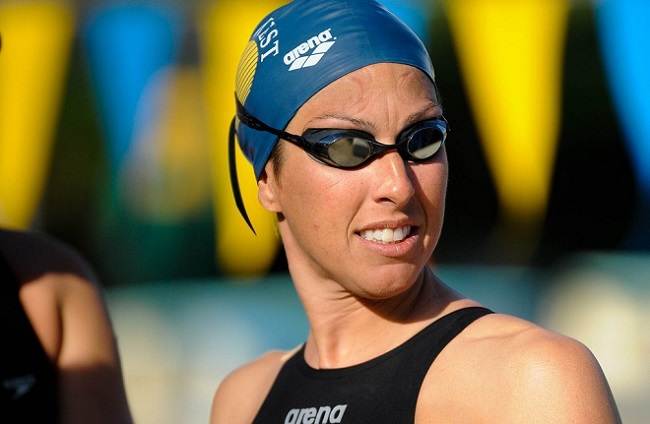 Swimming is an elegant and tough sport and has been a sport at every modern Summer Olympics. It has been open to women since 1912. it is one of the most popular spectator sports at the Olympic Games, along with athletics and gymnastics. Swimming has the second-highest number of Olympic events (after athletics).

Most of the best swimmers are from America, and the county has dominated this sport since the beginning, whether it be Mark Spitz during his time or recently Michael Phelps. Here is the list of the world’s top 10 greatest swimmers of all time.

Janet Evans is an American long-distance swimmer and the first woman swimmer to win back-to-back Olympic golds in any event. Janet was setting records at the national stage by the age of 11 and dominated the international scene when she set a new best timing in the 400 m freestyle at the 1988 Seoul Olympics, which stood for eighteen years.

She had short stature ( 5 ft. 5 inches) compared to other swimmers, but she still defeated them in every championship. Janet was also chosen to carry the torch in its last stretch and hand it over to the Boxing Legend Muhammad Ali at the opening ceremony of the 1996 Atlanta Games.

Kristin Otto is a German Olympic short-distance swimming champion. She has won six gold medals at the 1988 Seoul Olympic games, making her the first woman to win six golds at a single edition of the Olympics. Although Kristen was fit to compete in the 1984 Olympics, East Germany got boycotted that year.

So she wasn’t able to showcase her talent, and later on, a fractured vertebra in the following year worsened her Olympic chances, but she didn’t succumb to that. She shortly retired after her Olympics stint and currently works as a sports reporter for German television.

Ryan Lochte is the second-most decorated Olympic swimmer with a tally of 12 Olympic Medals. The American swimmer is currently 35 years old and one of the fiercest competitors to Micahel Phelps; Ryan currently holds the world records in the 200-meter individual medley, in the 4×200-meter freestyle (long course) and 4×100-meter freestyle (mixed) relay.

Amy Van Dyken is a spectacular former American swimmer and rose to success during the 1996 Atlanta Olympics. She chose swimming to battle and cope with her severe asthma condition at her doctor’s advice but helped pave her way to be the second most decorated female swimmer at the Olympics.

Van Dyken suffered a severe ATV accident in 2014 and severed her spinal cord at the T11 vertebra making her paralyzed waist down.

READ: Top 10 Most Popular Sports in the World

Natalie Coughlin is the most decorated female swimmer from America, tied with Dara Torres and Jenny Thompson. Natalie became the first female swimmer to defend the 10 m backstroke title at the Olympics after her victory at the 2008 Beijing Olympics and 2004 Athens Olympics. Also, in 2008, she equalled the women’s Olympic record of winning the highest number of medals (6) in a single Game.

Dara Torres is another swimmer on the long list of great American swimmers. She was away from the sport for seven years but then decided to make a comeback at the Sydney Olympics 2000, where she won 5 Olympic medals. The 52-year-old was 41 when she broke the record of the oldest swimmer to win a medal at the games during the 2008 Beijing Olympic Games. She is one of the greatest swimmers ever.

Matthew Biondi, known as the California Condor for his vast wingspan, is a legendary American swimmer and one of the greatest swimmers of all time. Matthew is a member of the International Swimming Hall of Fame.

He had won just one relay gold in his debut Olympics but came to all guns blazing in his second outing in Seoul in 1988 and steamrolled over his competitors to clinch seven straight medals, 5 of which were golds, creating four new world records along the way.

Mark Spitz is one of the greatest ever to grace the game and was popularly known as Mark, the Shark during his peak days. The American swimmer won seven gold medals in the 1972 Munich Olympic games, an extraordinary feat that has only been surpassed by Michael Phelps, who won eight gold medals at the 2008 Olympics. Mark is one of the only five Olympians to have won 9 or more gold medals.

It is no surprise that Michael Phelps is the best and greatest Swimmer in the world. He is a record-breaker and holds the record for the most Olympic gold medals, with 23 medals overall.

He has been the most successful athlete at the last four Olympics consistently. Michael earned Sports Illustrated magazine’s Sportsman of the Year award due to his unprecedented Olympic success in the 2008 Games. He has astonishingly won more medals than 161 countries.

Phelps has an extraordinary streamlined physique with arms spreading longer than his actual height, comparatively short legs, feet which are 14sizese enact like flippers and hypermobile ankle are better than that of a ballet dancer. He announced his second retirement in 2016 after the Rio Olympics.