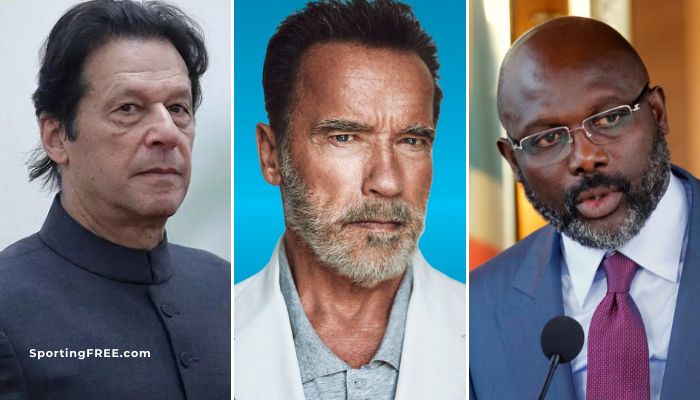 Sports and Politics have always been intertwined and politics has been an influential and essential part of governing sports in a country. Sportsmen joining politics is not new today, many sportsmen have joined politics after their career but only a few have succeeded in holding important positions and positions of power in politics. Here is a list of famous sports persons who became successful politicians.

Navjot Sing Sidhu played for the Indian national cricket team and was a prolific batsmen. He made his Test debut in 1983 and his ODI debut in 1987. He played 51 test matches and 130+ ODIs scoring over 7000 international runs and  is known for his attacking batting and six hitting ability.

After retiring from cricket in 1999, he joined Politics in 2004 when he won a ticket from Amritsar for the BJP. He won his first election by a big margin and worked for the local government in Punjab.

He also was a member of the Rajya Sabha in 2016 but resigned and joined the Congress in the following year. Sidhu served as a Cabinet Minister for the Punjab state government.

Between 2002 and 2006 he won 25 International Medals at various championships., Rathore entered politics in 2013 when he joined  Bhartiya Janata Party after taking retirement from the Indian Army.

He was elected as an MP in the 2014 Lok Sabha election from the Jaipur constituency. In November 2014, he was sworn in as the Minister of State for Information & Broadcasting, under the Narendra Modi government.

He was appointed as the Minister of Sports on 3 September 2017. In May 2018, he became Minister of State (I/C) for Information & Broadcasting.

Idi Amin was a Ugandan boxer who won the Light Heavyweight Championship between 1951-1960. He represented Uganda while it was under the British Rule and later the independent Uganda. He was the president of Uganda from 1971-1979. He served in the British army and Later in the Ugandan Army.

Sebastian Coe is a former British athlete who was very famous during the 1980s. He set nine outdoor and three indoor world records in middle-distance track events – including, in 1979, setting three world records in the space of 41 days – and the world record he set in the 800 metres in 1981 remained unbroken until 1997.

After retiring, he joined politics and was a Member of Parliament from 1992-1997. He represented the Conservative party of England. He was the leader of the opposition from 1997-2001.

Garry kasparov is a Russian chess Grandmaster and a former world chess champion. He was ranked World no.1 for the record most number of days from 1981 to 2005 and is regarded the greatest chess player of all times.

After his retirement from chess in 2005, Kasparov turned to politics and created the United Civil Front. Kasparov was instrumental in setting up The Other Russia, a coalition that opposes Putin’s government.

Manny Pacquiao is a Filipino professional boxer. He was the first boxer to win Lineal championships in five different weight classes. He has played 71 boxing matches winning 62 and drawing 2.

Imran khan was the captain of the Pakistan Cricket team. He is considered one of the best all- rounders in the world and captained Pakistan towards World Cup glory in 1992.

He made his test debut in 1971 and ODI debut in 1974 and has scored over 3000 runs and has picked up over 300 wickets in test cricket and is just one of the eight cricketers to achieve this landmark.

After retiring , he joined politics and later founded a political party, Pakistan Tehreek-e-Insaf (PTI) in  1996 He ran for the seat of National Assembly of Pakistan. His party became the opposition party in two provinces in 2014.

Arnold Schwarzenegger is an American former professional bodybuilder and powerlifter from the 1970s. He later became an actor and was a household name in the 1980s and was very famous for his body and physique.

George Weah is considered to be one of the greatest African footballers to play the sport. He had a very long career that spanned for around 18 years. Weah is one of the famous sports persons who became successful politician.

He represented Liberia Nationally and played as a striker for top European clubs including Chelsea, A.C. Milan, PSG, Monaco. He is the only African player ever to win the Ballon d’Or. He was the best FIFA player of the year 3 times in 1989, 1994 and 1995.

Weah became involved in politics in Liberia following his retirement from football. He formed the Congress for Democratic Change and ran unsuccessfully for President in the 2005 election, but lost it. Weah was elected President of Liberia in the 2017 election and sworn in on 22 January 2018.