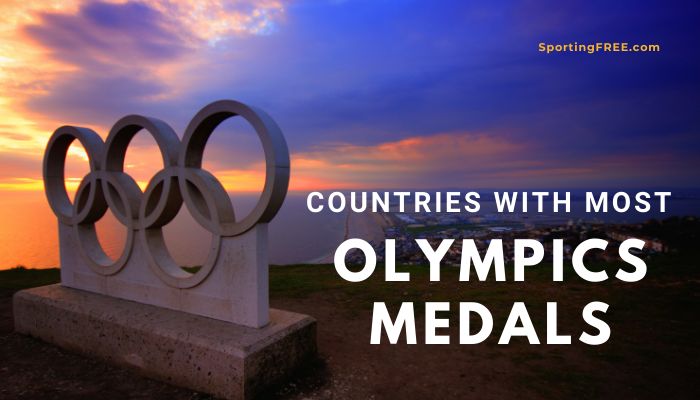 Top 50 Countries With Most Olympics Medals 2022

The Olympics is the most popular sporting event in the world. Held after every four years, athletes from all over the world participate and represent their country. Each edition of the event is held in a different city every year. Here are the lists of the top 50 countries with the most Olympic medals combining the Winter and Summer Olympics.

The moto sign of the Olympics consists of five rings which signify the unity of five continents. The first Olympics was held in 1986 at Olympia. Over the course of time, there are countries that have dominated the games.

The United States is the most successful country in both the Summer and Winter Olympic games. The USA has the most Olympic medals ever than any other nation. Tokyo Olympics 2022 are currently being played from 23 July to 8 August 2022 in Japan, let’s see the top 50 countries with highest Olympics medals.

Countries With Most Olympics Medals

Which countries have won the most Olympic medals?

The US is the most successful country in the Olympics. The United States of America has won a total of 2827 medals. The USA by a large margin is leading the race of most gold medals.

The USA has won  1127 gold medals and is the only country to win 1000 gold medals. Furthermore, it has won 907 silver medals and 793 bronze medals. The United States of America is the only team that receives zero funding from the government.

The United Kingdom comprises England, Scotland, Wales and Northern Ireland. It is the 2nd most successful country in the Olympics. The United Kingdom has won 274 gold medals, 299 silver medals and 310 bronze medals. In total, it has won 833 medals.

The third country with the most Olympic medals is Germany. With a population of 83,900,473+, Germany has won more than 800 medals in the Olympics. The European nation has won 283 gold medals, 282 silver medals and 290 bronze medals. It hosted both the Summer and Winter Olympics in 1936.

Italy is the country with the highest medals at the Olympics in fencing. It also hosted three Olympics games – 2 Winter Olympics and one Summer Olympics. Italy has won 246 gold medals, 214 silver medals and 241 bronze medals making a total of 701 medals.

Note: The medal figures are cumulative figures of Summer and Winter Olympics.