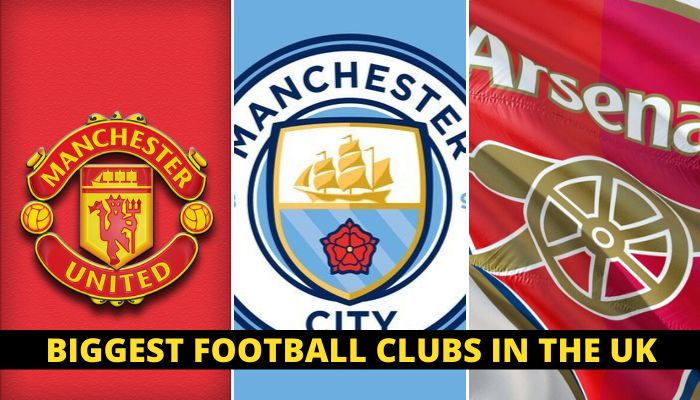 England is regarded as the birth nation of football and more than 500 clubs are in the UK.  It is not a surprise that some British clubs have dominated not just the local competitions but on the European scale as well. Who are the biggest football clubs in the UK? this question must have been part of your arguments.

It is very difficult to rank the club fairly but we have tried our best to list the 10 best football clubs in Britain based on the club’s revenue, shirt sales and fan following. It is obvious that many of you will disagree with the list but still, we have analysed it to find the worlds biggest football team in the UK.

Rangers FC is one of the two most famous and dominant clubs in Scotland. They had a glorious and triumphant past before facing liquidation and getting relegated to the fourth tier of Scottish football in 2012. Yet again they have shown their true class and are back into the Scottish premiership.

They currently are managed by Steven Gerrard and sit at the top of the table 20 points clear of the second-placed Celtic. They have competed in the Champions League this season.

The current form and playing style of Aston Villa does not reciprocate the amazing past this club has had. Once a dominant team in Europe, Villa currently find themselves in the mid-table of the English Premier League. But they have tasted glory in the past.

Villa has won the English title/ premier league 7 times and was runner up 10 times. They have won the FA Cup 7 times and the League cup 5 times. The most notable trophies they have won is the Champions League in 1981/82 and the UEFA Super cup 1982

Everton is one of the six Premier League teams to never face a relegation. Even though the Toffees have not won any silverware recently they have their own fair share of trophies. They have won the English title 9 times and were runner up 7 times.

They have won the FA cup 5 times and runner up 8 times. European Cup Winners’ Cup (1985). Only 3 clubs have won more English league titles than Everton. The appointment of Carlo Ancelotti has rekindled the form of this club and they are hoping to bring back the European nights to Goodison Park.

Manchester City’s rise has been remarkable in the last decade and seen significant growth in the fan base around the world. It is now regarded as one of the major clubs in Europe. Gone are the days when the City was a mid-table relegation battling club. Ever since the Arab money investment, the club is rising to glory.

Citizens have won 6 Premier Leagues and have been runner up 6 times. 4 out of their 6 Premier League titles were won in the last decade. They have won 5 FA Cups, 7 League cups. Guardiola’s side is still in the hunt for their first European silverware and will carry on the pursuit in the upcoming Champions League.

Just like few other clubs in this list, the Spurs have not been successful recently but have won major trophies in the past.

Celtic is the most underappreciated and undermined club of Europe with a loyal fan base. The club has been the most dominant club of Scottish Football and awarded as the best club in Scottish history. The number of achievements by the club is staggering.

London’s most successful and biggest soccer club, Arsenal has dominated English football for many years.

Even though Arsenal has inconsistent form in the past few years, the trophy cabinet of Gunners contradicts their current misery. Arsenal has won 30 trophies overall. The best out of them was Arsene Wenger’s invincibles of the 2003/04 Premier League season.

The club has won 13 English first division/Premier League titles, 14 FA Cups, 2 League cups, 1 European cup winner’s Cup. Mikel Arteta’s side is currently 10th in the Premier League and are out of European place contention. Their only hope of winning some silverware is Europa League this season.

Chelsea has held a constant position in the list of Premier League big six. Graced by the presence of  extraordinary home grown players combined with some of the best talented footballers Chelsea has always managed to maintain reputation and a good record.

One of the most successful clubs of Premier League, Liverpool have failed to put a strong performance on the paper but still, they are the second biggest football club in Britain.

The resurgence of the club under Jurgen Klopp has shown the world the true quality of the club. Anfield’s 30-year long wait for the Premier League trophy was finally ended as Liverpool won the 2019/20 Season.

Manchester United is the biggest football club not only in the UK but in Europe alongside Real Madrid. The Red Devils is the most famous soccer club with massive fans base spread across all parts of the globe.

The club’s history and legacy speak for themselves and reflects why United is regarded as the most successful clubs in Europe. United has dominated the Premier League by winning it 20 times.