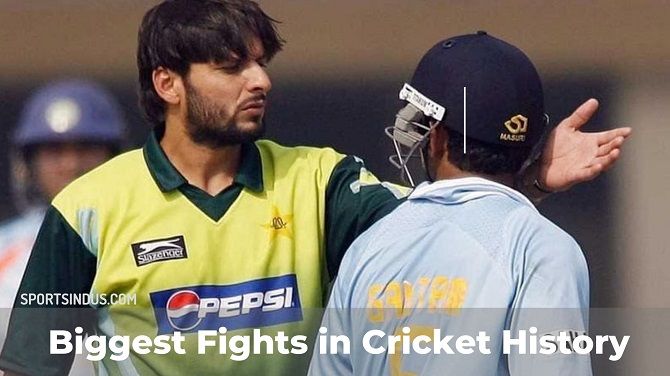 Cricket is one of the sports that unites two nations together and is known as a gentlemen’s game, but there are some ugly moments in cricket history that fans don’t want to remember. These players broke the spirit of cricket on the field and become part of our list of the top 10 biggest fights in cricket history.

During Benson and Hedges world cup 4th March 1992, Kiran More, Former Indian Wicketkeeper-batsman, was appealing numerous times, so Javed asked him why he was doing. He stopped the bowler and started staring at Kiran More. After that, they exchanged words with each other, and Miandad started jumping on the crease, and he also started shouting “Well Bowled”.

In February 1981, this incident happened when Miandad played Lillee’s in-swinger ball. He was completing his run Lillee by mistakenly comes between Miandad. So that time, Miandad pushed him to complete his run and start abusing him. They both exchange words, so while in that time, umpires were trying to separate them, and when Miandad was backing out, Dennis Lillee kicked him. After that, Miandad charges him with a bat, but the umpires blocked him by doing that.

This Australian fast was famous for its sledging players. Also, he was one of the top Sledgers from the Australian team. It was a match against New Zealand. During the death overs, Scott Styris struck consecutive boundaries to Johnson, and then this paceman got annoyed by that and started provoking him, and they come face to face with each other banged their head with each other.

During the 2011 world cup, After getting Ponting’s wicket, Pakistan was celebrating, but the umpire call was not out, but it was clear everyone saw that Ponting’s bat touched the ball, and meanwhile in that time, Umar Akmal exchanged some words with Haddin, and yonis khan pushed out Haddin and interrupted verbal alteration between these both

This was the second time when this Indian left-hander batsman got involved in this kind of situation. On 31st Oct 2008 during the test between Australia and India. Gambhir was in the top form. He was hitting consecutive centuries against Australia.

So forgetting his wicket, Aussies started sledging, and it was Shane Watson was troubling Gambhir with the ball, and Gambhir lost his temper, and while completing the second run, he hit his shoulder on the stomach of Watson after that Gambhir was banned for one test match.

READ: Top 10 Richest Cricketers With Their Net Worth and Salary 2022

India and Pakistan are big-time rivals they are so many fights happened between these two teams, but this one of the best fights happened. Both of these players are star players during this match; both were at their best. Both started provoking each other that turn ugly when Gambhir pushed Afridi while completing his run, and they started abusing each other in Hindi and Urdu Curse words.

The Rawalpindi Express Shoaib Akhtar had so much controversial career. He had fights with the player like Matthew Hayden, Andrew Symonds, Virendra Sehwag but the famous fight he had against Indian Turbanator Harbhajan Singh. When India and Pakistan were taking on each other in the 2010 Asia cup. I

India was in tough condition. Suresh Raina and Harbhajan were on the crease, and they were looking to snatch the match from Pakistan. And when Akhtar was bowling to Bhajji, he bowled some bouncers to him and start provoking him, and after the over, they abuse each other in Punjabi slang language. And India was victorious that night.

This is one of the ugliest moment happened ever in the cricket. It was the 2008 Border-Gavaskar Test match, and this series was also famous for the umpire’s wrong decisions. The statement on racism by Harbhajan Singh was banned for the three test matches.

During the match between two IPL teams Mumbai Indians vs Royal Challenger Banglore, this sad incident happened. As we know how much Australian and West Indies players hate each other. So When Starc was bowling to Pollard, he missed the bowl, and then he also bowled one bouncer to Pollard, and they share some verbal spat. On the next ball, only Pollard suddenly moves out from the crease and annoys Starc, throws them in the direction of the Pollard, and then angry Pollard also swings his bat in the direction of the Mitchell Starc.

This is the worst fight and the biggest fight in cricket history. The match was between Melbourne Renegades vs Melbourne Stars. It started when Samuels pushed David Hussey while he was running for the second run, and later in the second inning, Warne started provoking him also grabs his jersey, and at one point, when Clint MacCay bowled one bouncer, Samuels Defended that ball. Warne throws that ball on the face of Samuel, and counter-reaction Samuel throws his bat.