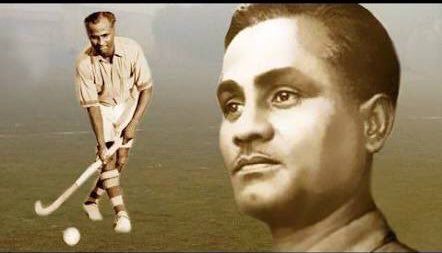 Though Cricket is the most loved and followed sport in India, field hockey is officially the national sport of the country. India has dominated the game since the beginning and is the first non-European team to be a part of the International Hockey Federation. The Indian hockey team has won the Olympic gold medal eight times, which is a record in itself. India is home to some of the greatest hockey players the world has seen, here are the best Indian hockey players of all time. Shyam Chand was undoubtedly the greatest and the best Indian hockey player in the world and the most talented player India ever produced. He was nicknamed ‘Wizard’ for his exceptional ball control, it is said he had the world at his feet whenever he came onto the field. Apart from leading India to three consecutive Olympic gold medals between 1928 to 1936, Dhyan also made people around the globe fall in love with the game.

All eyes were on him whenever he played, he has scored over 400 goals in his career and is regarded as the legend of the game, and no one has ever come even close to Dhyan Chand’s greatness and skill play.

On his birthday, 29 August, India celebrates National Sports Day. India’s highest lifetime achievement award in sports is named after him– Dhyan Chand Award. Adolf Hitler even went on to offer him citizenship, which Dhyan Chand refused. He is also an Army Major and was awarded the Padma Bhushan. Balbir Singh Sr is also known as the modern-day Dhyan Chand is often considered as one of the greatest centre-forwards that the game has ever seen. He was the backbone of the India Men’s Hockey time post Independence; he used to single-handedly win and save matches for India, his crucial contribution was during India’s dominant run winning three consecutive Olympic Gold in 1948, 1952, and 1956.

Balbir still holds the Olympic record for scoring most goals by an individual in an Olympic men’s hockey final; he had scored five goals in India’s 6–1 victory over the Netherlands in the final during the 1952 Olympic Games.

After retirement, Balbir also coached the Indian Hockey team for some time and helped India during their 1975 World Cup triumph. Singh was the first hockey player to be honoured with the Padma Shri for his contributions to the game. Roop Singh is the younger brother of legendary hockey player Dhyan Chand, while he couldn’t often be in the limelight like his elder brother, he is one of India’s most talented and underrated hockey players. Roop Singh had outscored his brother at the 1932 Los Angeles Olympics, and this was his first appearance in the Olympic Games.

He was in red hot form as he scored 13 goals in two games which is quite astonishing, he unbelievably had scored ten goals in the final match against the USA.

In the 1936 Olympics, Roop Singh scored nine goals and was the only Indian player to score in all the games, which were key to India winning the gold in Berlin. After the Berlin Olympics, the Germans were so impressed by his play that they named a street after him. Roop, like his brother, was also into the army and was part of the armed forces of the Maharaja of Scindia. Leslie Walter Claudius was an Anglo-Indian hockey player. He is regarded as the best halfback in the history of the sport. Leslie was a leader on the pitch, led from the front, and held the back-line together. Leslie was part of the Indian team, which won the Olympic gold in 1948, 1952, 1956, and a silver medal in 1960.

He was the first Indian hockey player to participate in four Olympics and holds the record for winning the most Olympic medals in Hockey. He was honored with the Padma Shri in 1971. Udham Singh, along with Leslie Claudius, is the player who went on to represent India in four Olympic Games. He was once known as the pillar of the Indian Hockey team, which dominated in the 1950s. Fans claim he was a treat to watch and had the ability to play as the inside-forward while being a solid rear-guard. He was famous for his finesse and fluency in his play.

He was only stopped by a finger injury, otherwise, he could have participated in his 5th Straight Olympic Games. After retiring, Udham Singh took the post of manager for the Indian team and won them the silver medal at the 1968 Mexico Olympics. He is one of the best Indian hockey players of all time. He was honored with the Arjuna Award. Dhanraj Pillay is a modern-day legend one of the best finds in Indian hockey history, and he was the ex-captain of Indian Men’s Hockey team. Dhanraj was an excellent forward with a sharp attacking attitude, and he always dominated the games with his pace and accuracy. Dhanraj scored 170 goals in 339 appearances during his illustrious career.

Under his captaincy, the Indian hockey team won the 1998 Asian Games and 2003 Asian Cup. As a player, he represented India in 4 Olympics, 4 World Cups, 4 Asian Games, and 4 Champions Trophies between 1990 and 2004 still couldn’t win an Olympic Gold. He was honored with the Padma Shri, the Rajiv Gandhi Khel Ratna, and the Arjuna Award. Sudeep Singh is one of the popular and best Indian hockey players in modern-day field hockey. He was born on 27 February 1986 in Haryana. Sudeep is an ex-captain of the Indian national team, and he is a penalty corner specialist and plays typically at the full-back position for his team.

He was nicknamed as flicker Singh as he is an exceptional drag-flicker and was known to have the fastest Drag Flick in the world (speed 145 km/h). Singh’s career was interrupted when he was accidentally hit by a gunshot in the Kalka Shatabdi Express train while joining the national team for the world cup.

Singh was 20 at that time and was almost paralyzed and was stuck in the wheelchair for one year. Singh not only miraculously recovered from that serious injury but also stabilized himself again and played world cup for India in the 2010 Indian team. Sudeep Singh is MLA of Pehowa City, which is situated in Kurukshetra and also currently holds a DSP rank in the Haryana Police.