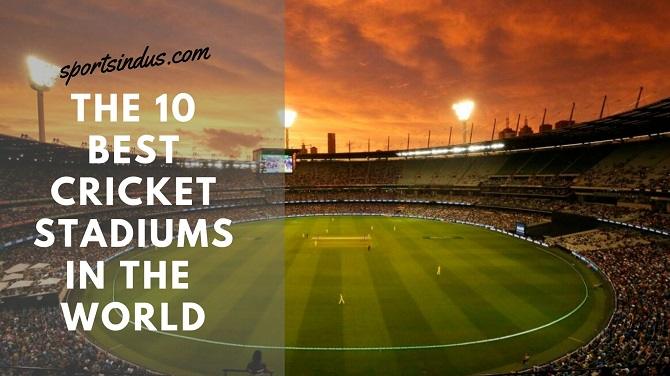 Cricket is the second most-watched sports in the world with more than 3 Billion fans on the earth. And it has an illustrious history dating back from the 18th century and from that point, cricket has been evolved lot surely. Cricket stadiums are some of the best structures of engineering where match played.

Today, we will look at some of the top 10 best cricket stadiums in the world. The stadiums listed below are based on capacity, size, lighting, pitches, facilities and view. Cricket has three main formats One day, test and T20 which is the shortest and most popular format and it’s one of the fastest growing sport in the world. Here are the best cricket stadiums in the world.

Old Trafford is one of the beautiful stadiums in the world. It was built in 1909 by Archibald Leitch and opened on 19 February 1910. It has the capacity to hold  75,635 people at the same time. It’s situated in Sir Matt Busby way Old Trafford Greater Manchester England. This stadium hosted FA cup final, 1966 world cup Euro Cup 96 and much more.

This stadium is one of the best Stadium in South Africa. And it was built 1956 and the renovated in 1991 when they came back to cricket international. It has the capacity to hold 34,000 people at the same time. This stadium was the venue of 2003 world cup final between Australia vs India and also an Inaugural T20 final match between Pakistan vs India.

Newland Cricket Ground is one of the most beautiful stadiums which is situated in the heart of Table Mountain and Devil’s Peak. And it was established on 1988 and it can hold 25,000 people in the ground. And back in 1989, South Africa played their first match against England. And it’s home ground of Cape Cobra’s which is part of RamSlam T20 league.

Eden Garden is one of the most iconic ground. It has the capacity to hold more than 90,000 audiences at the same time that makes this stadium second largest in the world. It was built in 1864 and the Indian Army owns this stadium. And this stadium witnessed one of the historic feats in the world of cricket when Indian cricketer Rohit Sharma scored 264 runs individually and it’s a world record. This is the best stadium in India not only in terms of capacity but also looks amazing.

Australia has some awesome grounds and WACA is one of them. It was built in 1890 and it has a capacity of 20,000 people. And it’s located close to the sea. And this stadium pitch regarded as one of the quickest and bounciest ground so bowler just loves to bowl here. And WACA is known as ‘Pacers Paradise’.

England is the home of Cricket and they have some awesome cricket grounds and Oval is one of them. It was built in 1845 and owned by Duchy of Cornwall. And this stadium held first test match between England vs Australia and it was also a venue for the first FA Cup final. And it’s home of County side ‘surrey’.

Himachal Pradesh Cricket Association is one of the most beautiful stadiums in the world it is located in the valley of Himachal Pradesh and it’s situated at high on altitude 4,780 ft from sea level. It was built in 2003 and India vs England in 2013 as the first One day happened here. The stadium is surrounded by nature which makes it beautiful and best cricket stadiums in the world.

It’s a tie between HPCA and SCG. In Australia, SCG is the multi-sport stadium but it’s majorly used for International cricket matches. On this ground, Football and Rugby match also happens. It was established in 1848 and has the capacity to hold 48,000 people in the stadium. Australia vs England test match played on this ground first time on 19 February 1882.

There is no doubt that Lord’s is the home of cricket all over the world. It was established back in 1814 by Thomas Lord. And it has the capacity to hold 30,000 people at that venue. And this stadium witnessed 4 world cup finals in this arena.

MCG is the world’s largest cricket stadium and second biggest stadium in the world. This stadium was built in 1854 and it’s multi-sport stadium. It has the capacity to hold 95,000 people in his arena. First, ever test match and ODI match played on this ground in 1971. And also two world cup finals happened on this ground. This is one of the most beautiful cricket stadiums which makes it best cricket stadiums in the world. A retractable roof is proposed for the Melbourne Cricket Ground to cover the stadium.