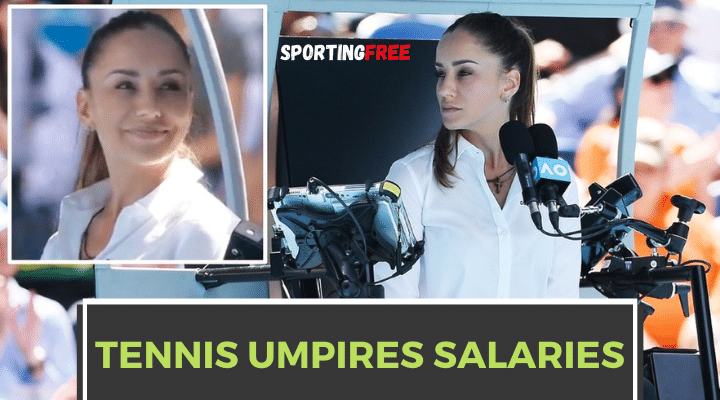 Tennis was one of the first to discuss gender issues in the realm of sports. Thus, the International Tennis Federation (ITF) very successfully established two associations which are ATP (Tennis Association for Men) and WTA (Women Tennis Association), to eliminate gender disparity in Tennis.

However, if there is one thing that ITF fails to focus on, despite curbing gender disparity, they have not been able to dissolve huge gender pay gaps. To be on a fairer and factual side, players’ voices are still heard and make the headline, but if there’s someone who fails to make it to the headlines, they are the umpires.

Do you know how much do Tennis umpires get paid? What is the pay gap between a men umpire and a women umpire? Who is the world’s highest-paid Tennis umpire?

Yes, Tennis is one of the highest paying sports to its umpires. However, there exists a massive wage gap between male and female Tennis umpires.

And even between chair umpires and line umpires there exists a huge pay disparity.

As it’s very evident that male referees receive twice the amount the females get. In fact, the line umpires who have such a tiring and super crucial job at the game are so underpaid with just £500 per match.

On the one hand, we talk about that men and women are paid differently for the same work, ITF, on the other hand, ITF has created a special elite category of referees called ITF Gold Badge Chair Umpires.

The umpires falling under this list are the most experienced umpires globally, skilled to officiate grand slams and Wimbledon finals.

The salary gap is evident even for the Gold Badge Chair Umpires as all the male umpires earn a whooping £1,500 per match compared to just £750 for female chair umpires.

Tennis has 2 sets of umpires, one being the chair umpire who officiates the whole match and keeps a check on the rules and the score. The second being the line umpires who keeps a fixed eye on whether the ball pitching is inside the line of the court or not.

Both the referees have extremely crucial jobs with no room for error. Even the ITF acknowledges the valuable contribution of Tennis referees toward the game by awarding handsome salary contracts.

Disclaimer: All the figures and numbers about the Tennis umpire salary are based on the analysis, research and reports released by the International Tennis Federation (ITF).