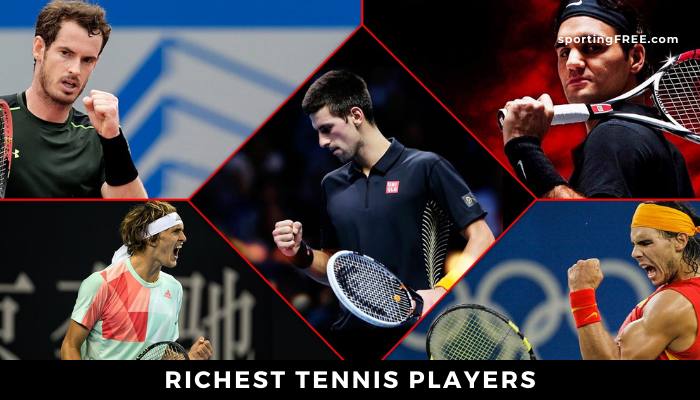 Tennis is a widely watched and celebrated sport, fans love watching their favourite players match up against each other on the court whether it be a Grand Slams event or a masters event. These players win huge prize money for their hard work and determination, apart from that they also receive lucrative brand endorsement deals which complement in increasing their net worth. Here is a list of the top 10 richest Tennis players in the world in 2023.

Roger Federer is unsurprisingly the richest Tennis player on the planet with a stunning net worth of $900 million. Federer not only has the strongest brand profile among tennis players but also among athletes, he made around $100 million through endorsements alone in the year 2023.

The next richest tennis player after Roger Federer is the Serbian International Novak Djokovic. The Current World Number one player as of March 2023, Djokovic has an estimated net worth of $220 million.

Among the $220 million, $145 million is his overall prize winnings which is the highest among all tennis players. He has several brand endorsement deals including brands like Uniqlo, Mercedes-Benz, and Bombardier Aerospace.

Serena Williams is a name no Women tennis fan can ever forget, she has won a record 13 Grand Slam Singles and is one of the most successful female tennis players in the Open era. The US International, Williams has a net worth of around $200 million including $93 million from prize money. Serena Williams is the richest women Tennis player in the world.

Although Rafael Nadal is moreover known for his on-court heroics, he too like his arch-rival Roger Federer has managed to build a reasonably impressive brand portfolio. Rafael is associated with several brands in quite diverse markets like Nike and Emporio Armani.

Nadal has been quite successful off the court commercially, he has a net worth of around $190 million and is ranked 27th on the Forbes list of most paid athletes in the world. Nadal’s brand logo the ‘Raging Bull’ is a representation of his style of play on the tennis court.

Andre Agassi is a retired professional tennis player, from the United States. The former World No.1, Andre Agassi retired from professional tennis in 2006 due to back injuries but still has a net worth of 175 million dollars. At his prime, he had a stunning brand portfolio where he was associated with top brands like Nike, Adidas, Kia Motors, American Express, Ebel Swiss Watches, and Mountain Dew.

Two Time Olympic Gold Medalist, Andy Murray is the sixth richest tennis player with a net worth of $165 million. The Brit managed to sign endorsement deals with big brands and companies like Adidas, Under Armour, Bank of Scotland, etc. Murray’s injuries throughout his career have been an obstacle for him and stopping him from climbing this list.

Former American professional Tennis player, Pete Sampras is the only player in the open era to win at their final grand slam tournament. Sampras has a net worth of $150 million. He has endorsed brands like Pizza Hut, Nike, Wilson, Babolat, Danon in his career

The Infamous Maria Sharapova even after retirement is on the list of the world’s richest tennis players, as she has a stunning net worth of $135 million. Sharapova was dominating on and off the court, being the face of many fashion brands throughout her career.

Forbes had reported that Maria Sharapova was the highest-paid female athlete for consecutive 11 years, grossing around $325 million alone from prize winnings.

McEnroe was an American Professional tennis player and was the former world No. 1 ranking in both singles and doubles. He has a net worth of $100 million.

Four-time Olympic Gold Medalist, Venus Williams has won 23 combined grand slams. The US International Tennis player has a net worth of $95 million including around $47 million from prize winnings.

Venus has her own clothing brand called EleVen besides that the former world No.1 earns around $10 million through endorsement deals with brands like Nike, Coca-Cola, Rexona, Mercedes Benz, and Hublot.