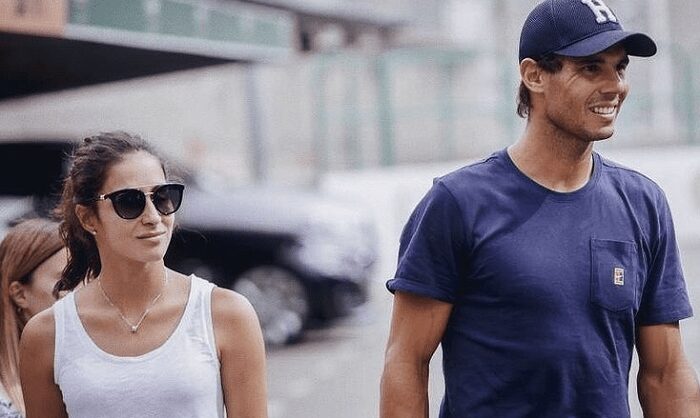 Rafael Nadal wife: All you need to know about Xisca Perello

Rafael Nadal is one of the greats when it comes to professional tennis, He is said to be the king of Clay. Nadal currently ranks world no. 3 after losing to Novak Djokovic in the semis in French Open. The personal life of Rafael Nadal and his wife Xisca Perello is very much under the covers from the public eyes.

We often see his wife supporting him from the standing, but today we dig deep to know Rafael Nadal’s wife, Xisca Perello.

Rafael Nadal and Xisca Perrello began to date in 2005 before officially coming into public eyes in 2017, where they were photographed in their hometown. It is said that Rafael met Xisca through his younger sister Maribel. As she was a friend of Perello who attended the same high school.

The pair began to date when she was 17, and he was approximately 19 years old and managed to keep the news out of the media for nearly three years. Rafael and Xisca have been together for nearly 16 years today. And have kept most of their relationship private from the media.

READ: Novak Djokovic Wife, Jelena and Children: All We Know About them

In January 2019, Nadal and Xisca announced their engagement and later got hitched on October 19 in the same year after their 14 years of relationship. The wedding took place at the castle of La Fortaleza, the Island of his birth in Mallorca, in front of 350 guests, including actors like Tom Hiddleston, Olivia Colman and Hug Laurie.

However, there was no presence of Roger Federer, his all-time tennis rival, although they spent an excellent year together.

She’s the only daughter of an entrepreneur and a municipal employee in Palma in Majorca. Xisca shifted to Londen to Study Bussiness Management and worked at MAPRFE which is a Spanish sporting company. But later shifted back to Majorca and joined an insurance company.

READ: Who is Roger Federer Wife, Mirka? All We Know About the Couple

After finishing her degree and working in insurance, Xisca chose to quit working and spend time administering and assisting Rafael Nadal’s foundation, which he started about 10 years ago. Maria Perello currently serves as the Project Director of Strategy and Relations with Institutions for the Rafa Nadal Foundation.

Xisca doesn’t have any official social media account as she likes to be away from media and the limelight.