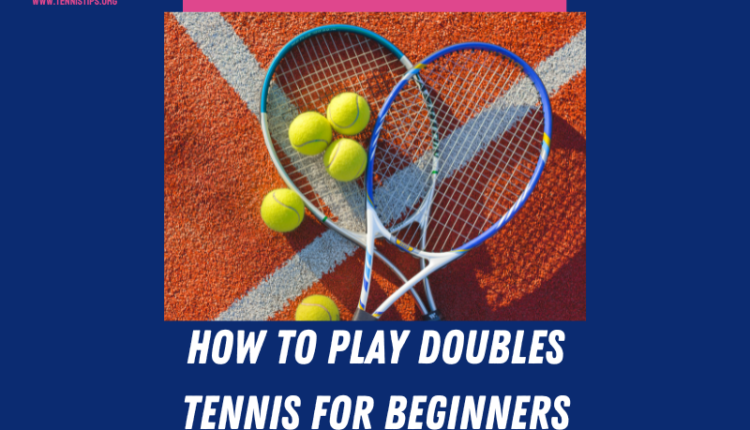 If you’re new to tennis and want to learn about all the rules before you step onto the court, you’re in the right place! We’re here to teach you all you need to know about how to play doubles tennis like a pro!

The reason behind this is that it is less strenuous on the players’ bodies and, since there are two players on the court, they need to cover less ground than they typically would when playing singles. With that being said, if you were looking for a good way to practice your tennis skills, playing doubles tennis might just be the perfect option!

Finding useful info about how to play doubles tennis for beginners can prove especially difficult considering there is a ton of info floating around. Some info could even be incorrect or incomplete, so it can take quite a bit of time and effort to find the correct one. Not to worry, though! We got your back. With our summarized guide on how to play doubles tennis for beginners, you’ll learn all there is to know and be ready to start playing in the blink of an eye!

A Complete Guide on How To Play Doubles Tennis for Beginners

Doubles tennis is played by two teams consisting of two players, and the players are typically all-male or all-female. It is also played on a different court than singles—the court is wider and includes the so-called alleys, which doesn’t apply to singles.

To better understand all the rules when it comes to playing doubles tennis, we summarized all the info into an easy-to-read list. This is the easiest and most convenient way to learn about all the aspects of doubles tennis. Take a look below to find out all you need to know:

The first thing that should be done is choosing which side will serve first. Once you do that, you and your partner should also decide which one of you will serve first for your team. The opposing time will also do that.

Players will also be switching sides after every point. For every point, a player will have two chances to serve. If a player faults on the first serve, there’s a chance to score a point during the second one. In case a player faults on both of his or her serves, the point will be considered lost. When a player is returning, he or she should position themselves near the baseline. When a player is not returning, they should be positioned near the service line.

Since doubles tennis is played a bit differently than singles tennis, your strategy for playing should also be different to get the best results. Here, it all comes down to communication and teamwork. Managing to provide the best performance will only get you so far if you don’t also work with your partner and call the shots together.

One of the most important things when it comes to strategy is how you position yourself. It’s essential that you stand a few feet away from the doubles alley when serving. This way, you’ll be able to handle any wide return, and also cover half of the court quite comfortably. Standing near the center of the service box when your partner is serving would also be a good idea. This is an excellent position for hitting volleys which also allows you to cover the lob in case it happens.

If you’re wondering where to stand when you’re partner is returning, we got you. You should position yourself a little behind the service line, which allows you to cover the court in case your opponent gets a volley. If you want to volley, you should move forward. If you want to include even more useful tactics in your doubles strategy, avoiding the net player and hitting the ball to the net player’s feet can help you immensely.

The last thing that we’ll cover regarding doubles tennis is scoring. Scoring in tennis, generally, tends to be a bit more confusing for beginners and people who aren’t familiar with this sport. Don’t fret, though! It’s not as difficult as it sounds, and we’re here to break down the scoring system in layman’s terms.

Knowing about certain tips and tricks can be your golden ticket to beating the opponent when push comes to shove. That is why, to help you beat your opponent the next time you step on the court, we provide you with a list of useful tips that will come in quite handy. Take a look below:

It’s also important that these rules are explained properly, and for the person who explains them not to confuse you. That is why our guide is the easiest way to learn all there is to know in record time and with ease! Once you know what to consider and what to practice, you will be able to step onto the court and play doubles tennis like a pro in a flash!