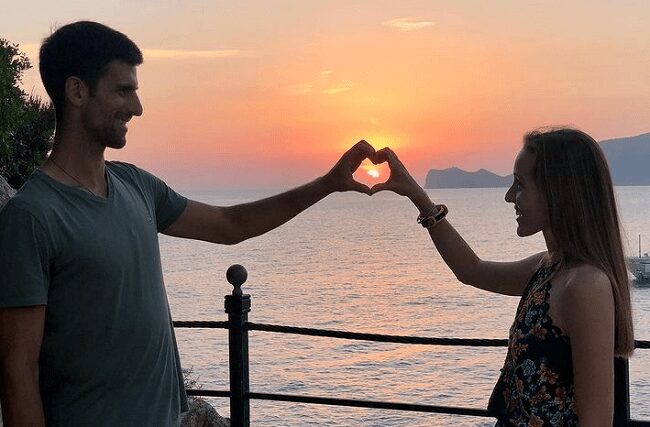 Novak Djokovic Wife, Jelena and Children: All We Know About them

Novak Djokovic is the current world no. 1 tennis player. Djokovic was born in Serbia on 22 May 1987. Recently Djokovic won his 19th Grand Slam Title by defeating Rafal Nadal in French Open in a semifinal. Novak Djokovic wife, Jelena has always been supportive throughout his career.

Fans have seen his wife cheering for him throughout the tournament. Not many are aware, but Jelena Djokovic has been a constant support system for Novak, who also happens to be his high school sweetheart. Lets us know more about the wife and children of the Wimbledon champion.

Jelena and Novak both played tennis at Serbian high school, that’s when they both met each other. Soon after, in 2005, the couple started dating and been together for 16 years now. Jelena went on to study marketing at Bocconi University, Milan, Italy whereas, Novak gained his reputation as a tennis pro.

In a private ceremony in Montenegro, Novak and Jelena got married on 10th July 2014. But five days before this important day, after completion with Roger Federer in a five-set Championship match, Novak won his second Wimbledon title.

READ: Who is Roger Federer, Wife, Mirka? All We Know About the Couple

He revealed in a press interview that the couple is pregnant with their first child and that he couldn’t be happier to dedicate this victory to his future wife and unborn child.

After his win in Wimbledon 2014, Novak announced he is going to be a father soon. After a week of the pregnancy reveal, Jelena and Novak got hitched. On October 22 2014, Novak and Jelena welcomed their first son Stefan Djokovic.

Stefan was present when Djokovic won his fourth Wimbledon title. Children under the age of 5 cannot observe matches from nearby tribunals under the regulations of Wimbledon. However, they made an exception for Stefan Djokovic, which made the whole Djokovic family and his father very delighted and emotional.

In September 2017, the pair were blessed with a beautiful daughter, Tara Djokovic. Djokovic announced the birth of his daughter through an Instagram post.