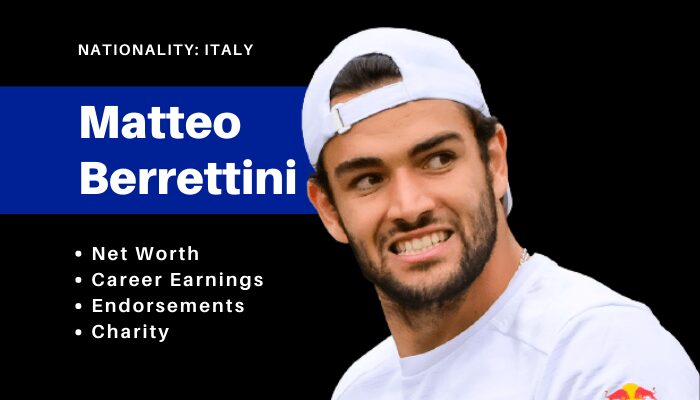 Matteo Berrettini is an Italian professional tennis player. He is one of the most promising young talents in the ATP circuit right now. He is currently #9 in the ATP rankings. The 24-year-old turned professional in the year 2014. Berrettini current net worth is around $7.5 million, he earns a huge amount of money from tennis.

Matteo Berrettini will take on Novak Djokovic for the 2022 Wimbledon 2022 Gentlemen’s Singles final. Arguably, the world’s best tennis player Djokovic have to play on his potential to beat inform Berrettini. The winner of the men’s singles champions will make $2.4 million in the prize money. Let’s know more about Matteo Berrettini financial stats, including net worth, earnings and sponsorship deals.

As per the reports, Berrettini net worth is estimated to be $7.5 million. Around 80% of Italian earnings are from his tournament earnings. His total career prize money till now is $6,514,992. Matteo has collaborations with tennis brands like Head and Signum-Pro. The 24-year-old also earn money from endorsements.

In 2019, Berrettini signed a deal with Peugeot. Furthermore, he is also the brand ambassador of the famous Italian oil company Colavita.

There is the Colavita logo on his jersey as well. Currently, his endorsement list includes brands such as Lotto Sports, Head, Peugeot, Colavita, ActionAid, Capri and Red Bull.

He made his ATP debut at the Italian Open in 2017. Although, he got defeated by Fabio Fognini in the first round. Berrettini won his first ATP title in 2018. He won the Swiss Open Gstaad by defeating Roberto Bautista Agut in the final. At the same event, he won his first-ever doubles title with Daniele Bracciali.

Matteo has been a promising talent, but the main problem with him is inconsistency. Despite showing a dominating display in the initial years, he failed to continue the momentum. However, he recovered and improved his game in 2022.

In 2022, he won the Serbian Open and reached his first-ever ATP 1000 Masters final. Although, he lost to Alexander Zverev in 3 sets in the final.

Matteo won his first-ever ATP 500 title on June 20. He won the Queen’s Club Championships and became the first Italian to win the title. He achieved the biggest moment of his career by reaching the 2022 Wimbledon final. The Italian will face world no.1 Novak Djokovic in the Wimbledon 2022 final on 11th July 2022.

Berrettini has a world professional record of 103-57 in ATP, grand slam and Davis Cup. He has won 64.4% of his matches. Till now, the Italian has won 5 singles career titles. Matteo has not won a single grand slam. It will be his first grand slam final against Novak Djokovic tomorrow.