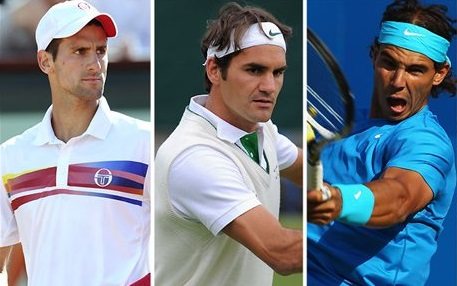 The Greatest Tennis Players of All Time: Federer, Nadal & Djokovic

Over the due course of the game’s history, Tennis has witnessed some of the best players such as Nadal, Federer, Djokovic and Murray but who is the greatest male tennis player of all time?

It’s always been difficult and injustice to compare players from two different eras in any sport due to various factors including technology, facilities, playing standards. However, despite all these factors we tried to compare the players and curate the list of the greatest tennis player of all time.

The ear we are living in is the best for the tennis fans as we are getting to witness some of the greatest tennis legends of all time at once – Roger Federer, Rafael Nadal, and Novak Djokovic.

John McEnroe turned pro in 1978 and went on to achieve 105 career titles, the most by any player. McEnroe won 7 Grand Slam Singles Titles: 3 Wimbledon and  4 US Open.

Jimmy Connors turned pro in 1972 and has won 147 career titles. Connors was regarded as the best player of his era. He was the number one ranked player for  160 weeks a record that took almost 30 years to be broken.

Connors still holds the record for most men’s single titles with109 tournament wins in his career. He won 8 Grand Slam Singles Titles: 1 Australian Open, 2 Wimbledon, 5 US Open. Connors retired in 1996 and was inducted into the hall of fame in 1998

Borg was the first player of the modern era to win more than 10 majors. The swede turned pro in 1973 and won 101 career titles until his retirement in 1983.

Pete Sampras was arguably the greatest tennis players of the 1990s. He turned pro in 1988 and has won 64 career titles. His record of 14 Grand Slam titles was the best in the world at that time. Out of his 14 titles, 2 are Australian Open, 7 Wimbledon and 5 US Open.

The only title which Sampras could not achieve in his entire career was the French Open. He retired in 2002 and was inducted into the Tennis hall of fame in 2007.

He has won 200 major titles in his entire career. Laver retired in 1979 and was inducted into the Tennis Hall of Fame in 1981

Djokovic is the 3rd best tennis player ever. The Serbian turned pro in 2003 and has earned 82 career titles to his name. Djokovic is one of the big three of tennis currently.

The position of Rafa Nadal in the history of Tennis is a hugely debated topic as many experts have ranked him the very best, above Roger Federer. There is no doubt about the Spaniards greatness as he is one of the Big three in tennis.

The King of Clay equals the record for grand slam titles with Federer at 20. His domination at the Clay court is regarded as the best.

Out of his 20 grand slam titles, 13 are French Open which clearly justifies his title of King of Clay. Nadal turned professional in 2001 and has won 86 career titles since then. He can easily overtake Federer to become the greatest ever.

Roger Federer is without a doubt the greatest tennis player of all-time in the history of the game. The Swiss maestro turned professional in 1998 and has gone on to win 103 career titles, the second highest of all time.

Federer has been the world number one for 310 weeks including a record 237 consecutive weeks. Federer has 20 Grand slam Singles Titles: 6 Australian Open, 1 French Open, 5 US Open, 8 Wimbledon.

The numbers speak for him as the 39-year-old is the greatest tennis player ever.