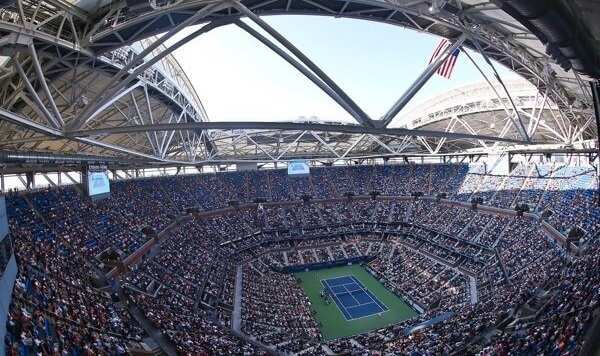 Lawn Tennis is known for attracting huge crowds, fans are crazy to see their favourite player play live. Earlier, the looks of the players matter alone, but now the facilities and infrastructure of stadiums play a key role in luring crowds for the ATP and WTA tournaments. Here is the list of the top 10 best tennis courts in the world right now.

If you have never been to a tennis court to watch the game then you should do because we have brought the world’s 10 most beautiful and best tennis courts for you.

In terms of capacity, Arthur Ashe stadium is the largest tennis stadium in the world. The stadium hosts US Open matches. It cost $254 million to build this stadium. The stadium facilities include five restaurants and two-level players lounge. The court of the stadium is made up of decoturf.

The centre court of All England Lawn Tennis and Croquet Club hosts the third grand of the year- the Wimbledon championship. The court has a grass surface and the stadium has a special box for the royal family. The centre court also has a retractable roof. It is one of the best Tennis courts in the world.

Court Philippe Chatrier is the main court of the French Open, commonly known as Ronald Gaross. The stadium was built by the French government after France won the Davis Cup in 1927. The stadium has over 20 courts, restaurants, bars and a VIP area for eminent personalities. Red clay is the main surface used in French Open.

The O2 Arena is situated in the middle of the O2 complex located in London. It is a multipurpose complex used for various sports and events. The stadium is equipped with changeable surfaces. As per the occasions, the surface of the arena can be changed to the ice rink, basketball court, tennis court, concert venue etc. The arena was opened for the general public in 2007.

It is the home of the BNP Paribas Open also known as the Indian Wells Masters tournament. The stadium is located in Indian Wells, Caledonia. The stadium was built in 2000 with an estimated budget of $77 million. Spread over an area of 88 acres, the stadium has 11 match courts and 6 practice courts which makes it one of the largest tennis stadium in the world.

Sinan Erdem Dome is a multipurpose arena located in Istanbul, Turkey. It was previously known as Atakoy Dome. The arena is the largest multi-purpose indoor venue in Turkey. The venue has a seating capacity of 22k+ for concerts and events and over 17 thousand for tennis and basketball matches.

The indoor multipurpose area is located in Quezon City, Philippines. Apart from tennis, the stadium also hosts basketball matches. The arena hosted the important matches of the 2014 Davis Cup.

It is located in Rotterdam, Netherlands. Inaugurated in 1951, the stadium was open for sports events in 1971. The arena hosts the Rotterdam Open every year. In 2010, the arena also hosted the World Artistic Gymnastics Championship. Various concerts and events are also conducted here every year.

National Tennis Centre is located in Kuala Lumpur is considered one of the best tennis courts. The stadium hosted the Paralympic Wheelchair competition in 2008. The stadium has a hard surface.

Located in Australia, Rod Laver Arena hosts the first grand slam of the year- the Australian Open. It was earlier known as Tennis Centre but later renamed to Rod Laver Arena in 2000 to honour three-time AO winner Rod Laver. The arena has a retractable roof and can accommodate 15000 thousand people at a time.