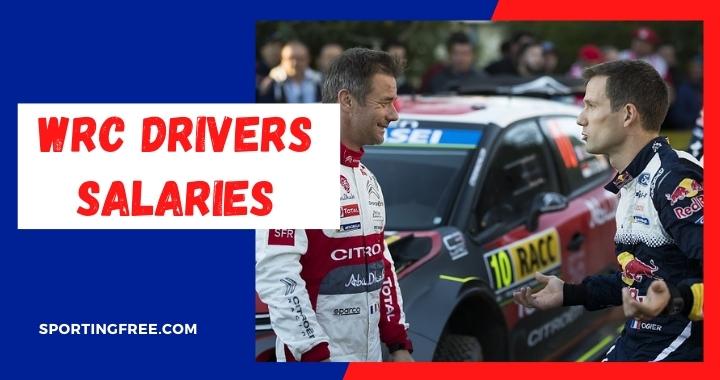 World Rally Championship (WRC) is arguably one of the most exciting and thrilling sporting events to watch. As much it’s fascinating and rushing for the viewers its equally dangerous and risky to execute for the drivers. Yes, to race in WRC it requires top-level driving skills, guts, and a fearless attitude. A recent report by popular sports website has revealed the WRC drivers salaries and highest-paid drivers.

It’s not wrong to say that they put their lives at risk to put up a thrilling and exciting race tournament. Though the WRC is authorized by FIA ( also authorizes F1) and they conduct the tournament with utmost safety but still keeping the fear side, risking it all deserves top money in return. And FIA doesn’t disappoint when it comes to paying their racers.

The WRC teams and the drivers are paid handsome prize money. But do you know which racer earned the most? Which manufacture emerged victoriously and earned the most? Do read the article to know about the highest-paid WRC drivers.

WRC is a rally racing competition and you must be wondering how is it different from F1? How is it riskier? What’s thrilling about this motor racing tournament? Well, the first and major distinguishing factor is that WRC is not held on circuits like F1.

Yes, you read it right, WRC is a timed rally event. Where there are manufacturers such as Toyota, Hyundai, and many more who produce special cars and hire the best drivers in the world under contracts and pay handsome salaries.

The 6 times WRC year-end World Champion Sébastien Ogier bagged the most amount with a whopping earning of $2.5 million, despite losing the 2019 WRC championship Ogier managed to finish 1st on the table.

While talking about champions, Current defending champion Ott Tänak claimed the 4th spot as he earned $1.5 million despite winning the 2019 WRC championship.

Hyundai Motorsport emerged as the best manufacturer of the year and also tops the list of highest-earning manufacturers.

WRC racing takes place in open circuits, The races are so colorful and dramatic and each event takes place for 3 days in which each driver takes part in 20 special timed staged challenges such as racing on public roads, slow, ice, rain, mud, mountain edges, gravel, and many more. This is where the risk, thrill, and excitement is generated.

The driver has its own team who are staged at the service park for 3 days, they are a group of skilled mechanics, and the driver is accompanied by a co-driver, who gives direction to the driver via specially designed codes to indicate the twist and turns in the track.

Thus, at the end of each event, there is a champion driver and a champion manufacturer and there are about a dozen events in a year. And at the end of the year, the WRC cumulates all the points earned in each event and adds them to release the table to determine the World Champion.

This year originally there were supposed to be 12 events. However, due to the COVID pandemic, many events got canceled.

Disclaimer: The above figures on the WRC Drivers salary are based on the analysis, research and reports released by the trusted sports websites.