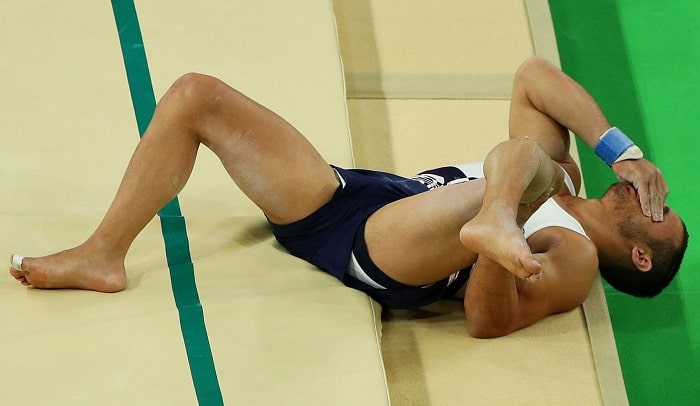 Olympic Games is the biggest collective sporting event in the world. Players of various sports come together in pursuit of the greatest glory of their careers. Winning an Olympic medal not only boosts their morale but also brings the players into the limelight. But along with the glory, a great injury risk accompanies the players on the biggest stage. Olympics games have witnessed many worst accidents, and no difference was the last edition.

Cutthroat competition and the struggle to achieve glory sometimes leads to career-threatening and fatal injuries to the players. Overuse Injuries. Some of the most common injuries during the Olympics are concussions, fractures, sprains, contusions, tendon and leg injuries.

As the Tokyo Summer Olympics are around the corner, we look at the top 10 worst injuries in Olympics history.

Nodar Kumaritashvili, a Georgian luger, lost control of his sledge and crashed into a metal pillar, resulting in his immediate death during a practice match of Vancouver Olympics 2010. He died on the spot because of head and torso injuries.

READ: Famous Athletes Who Died On The Field While Playing the Sport

Dutch cyclist Van Vleuten injured her head and face when she fell off her bike while taking a sharp turn during a women’s road race at Rio Olympics. She suffered three fractures in her spine and was treated for concussion in the intensive care unit. This is the worst bike injury in Olympics history.

Austrian snowboarder Markus Schairer suffered a horrible injury in the quarterfinal of the 2018 Winter Olympics. While attempting a mid-air jump, Markus landed on his upper back and neck, which resulted in a broken neck and fractured cervical vertebrae. He ended up finishing the race but was taken immediately for treatment.

South Korean weightlifter Jaehyouk Sa snapped and fractured his shoulders while attempting a 357-pound lift in the London Olympics.

Samir Ait Said suffered one of the most gruesome injuries in Olympics history. The Frenchman snapped his left leg as he landed during a vault. Matters turned worse when the medics who were carrying him on a stretcher dropped Samir on the ground.

French artistic gymnast Samir Ait Said suffered a severe leg injury, which is the worst gymnastics injury in the history of Olympics games.

Italian cyclist Vincenzo Nibali collided with Sergio Henao during the road race and fractured his collarbones. In an attempt to overtake his counterparts, Nibali ended up losing control of the speed and crashed. He could not finish the race further.

Hungarian weightlifter Janos Baranyai’s right shoulder popped open when he was lifting for a bronze medal finish in the 2008 Olympics. He suffered one of the worst injuries in Olympics history that turned into career-ending as Janos never participated in any other competition after that.

American snowboarder Kevin Pearce suffered a horrible head injury during the 2010 Vancouver Olympics. Pearce suffered a career-ending injury after a botched trick that left him in a coma for weeks. Kevin could never snowboard competitively again.

Derek Redmond suffered a popped Hamstring during a 400 meters dash run at the Barcelona Olympics of 1992. He suffered the injury when a distance of 175 m was left to be covered. Olympics witnessed one of the most touching moments of its history when Derek Redmond’s dad entered the track to help his son finish the race.

Manteo Mitchell was the lead runner of the Men’s 400 M relay at the London Olympics 2012. Mitchell was running at such a speed that halfway into the lap, he broke his left leg.