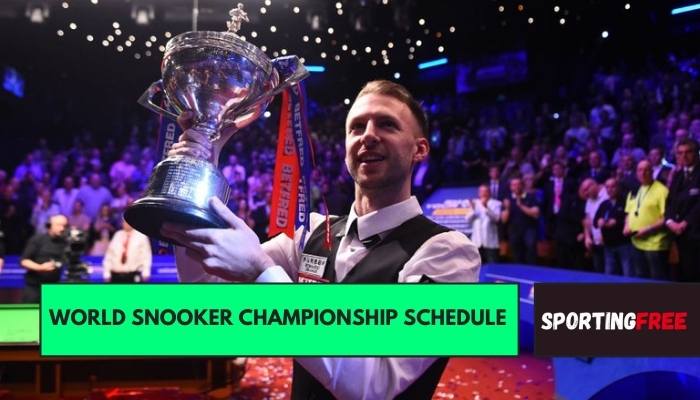 World Snooker Championship 2022: Everything To Know About It.

The professional snooker tournament will take place from 17 April to 3 May 2022 at the Crucible Theatre in Sheffield, England. The top sixteen players on the rankings list set will fight for the championship. All the information you need to know about the World Championship 2022 that is scheduled to start on April 17 and how to buy tickets for the tournament.

Why not love Snooker? When the snooker giants take on each other to emerge as the snooker champions at the year-end. Snooker is one of the fastest-growing sport in the world. Both, in terms of adopting the sport as a career and in terms of viewership.

The event is sponsored by the famous betting company Betfred. Thus, it is usually referred to as Betfred World Snooker Championship 2022 due to sponsorship reasons.

The World Snooker Championship 2022 qualifers to be held in the last week of April 2022 over four separate rounds and 16 players would make into the main draw.

There might be still 6 months left for the World championship to start but here is one good news for snooker fans. WPBSA recently opened the portal for fans to buy tickets for the 2022 World Snooker Championship.

Yes, the tickets are live, The tickets went on sale from 28th September, 12 PM, and can be bought only online via the Crucible Theatre website and World Snooker’s official ticketing partner SEE Tickets.

The tickets for next year will be divided into 3 categories, which are Standard, Premium, and VIP. Although the ticket prices differ as to the tournament proceeds by.

The VIP ticket starts only for Semi-Finals and Final. The package includes dinner, drinks, and a meeting with a legend.

The Championship was inaugurated in 1927, and next year will mark its 94th edition. Ronnie O’Sullivan is the defending champion after defeating Kyren Wilson (18-8).

The format of the Snooker Championship is such that 128 players will take part in the tournament starting from April 17th. And 16 players will qualify to compete against the top 16 players of the world in the main draw from Round 1.

Thus the list of current top 16 snooker player in the world are as follows.

Here is the matches format to is scheduled to take place this season.

The complete fixtures of the World Snooker Championship 2022 to broadcast by BBC and Eurosport in the UK.