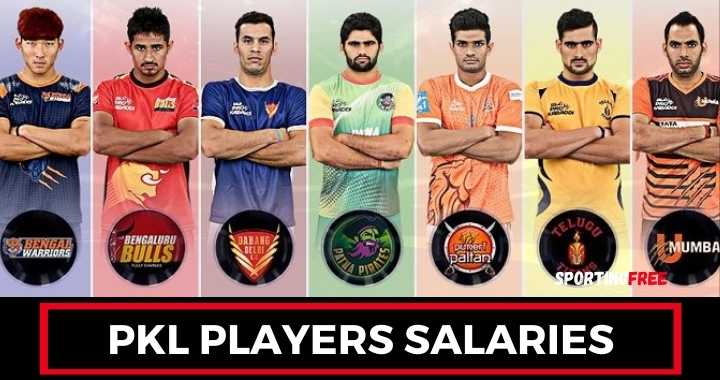 The Pro Kabaddi League (PKL) recently held the auctions for the upcoming season and players were bought for a handsome amount of money and will be getting a huge increment in their salaries. Pro Kabaddi League players salaries are based on their PKL auction contracts.

Kabaddi is one of the sports in our country which is played by millions but is known to pay extremely less. Star Sports for the first time in 2014 as per them took a gamble launching a privatised Kabaddi league based on the model of IPL.

The first season of the Pro Kabaddi League was a huge success with a viewership of 435 million and the following season just saw the graph upwards and such is the case with the salaries of players. Top players were reportedly paid an amount of 12.5 lakh in season 1 to 1.5 Crore in season 6.

Pro Kabaddi League takes place annually for 3 months between July and October and the governing body conducts auctions to bid for players. The highest-paid PKL players for the coming season are as follows.

Siddharth Desai has become the highest-paid player in the Pro Kabaddi League after he was bought by Telugu Titans for a whooping 1.45 Crore.

Fazel Atrachali is the only foreigner to make it to the list. Hailing from Iran he successfully managed to impress the U Mumba franchise.

Pro Kabaddi League has seen many small-town players becoming huge names in every household each year, such as the likes of Anup Kumar, Manjeet Chillar, Ajay Thakur, and many more. Another way to look at it is that players get a chance to solidify their selection for Team India.

India has just lost one kabaddi World Cup to date. Thus the credit for such success should also be given to Pro Kabaddi League.

The tournament started with 8 teams and were later expanded to 12 teams .

Patna Pirates are the most successful franchise in the Pro Kabaddi League. However, Bengal Warriors are the defending champions, and they recently won their maiden championship.

Kabaddi is one of the regional sports of India, having its roots back to rural areas or villages. It is one of the most popular sports in India but has lacked mainstream coverage and mainstream platforms for players. However, after the introduction of the Pro Kabaddi League, talents who lacked opportunities and money got the chance to perform and deliver.

Disclaimer: The above information about the PKL players salaries are based on the analysis, research and reports released by the officials.