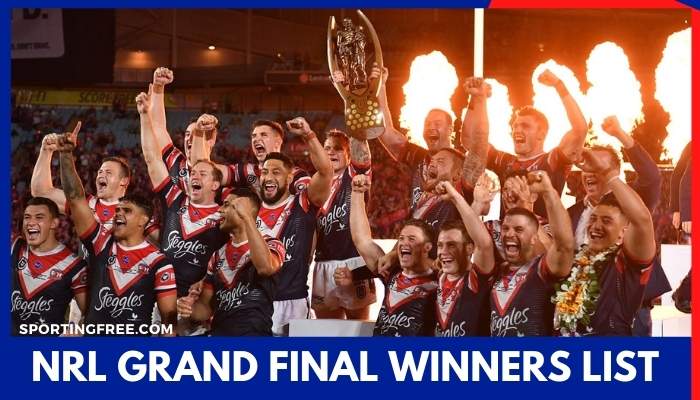 Australia’s ANZ Stadium in Sydney is all set to host the grand final of NRL on 25th October between Melbourne Storm and Penrith Panthers. Both teams will be facing each other for the time in NRL Grand Final. Here is the winners list of the NRL Grand Final from 1908 to 2022.

NRL is one of the most viewed sporting events in Australia as Rugby is the most populous sport in the country. NRL’s grand final held in 1999 broke the record for attendance at an Australian rugby league game, with 107,999 people attending the match.

Teams from Australia and New Zealand compete each year in the National Rugby League from the month of March- October. This year the league was suspended for a while after Round 2 due to COVID. However, this year there were certain changes such as rounds of matches that were reduced from 24 to 20 matches and it was decided that only 1 referee would be used in a match.

NFL was inaugurated in 1908, however, it started as New South Wales Rugby League and got revamped many times before being renamed to NRL in 1998.

There were certain years where the grand final was not held instead teams were crowned champions on the basis of their table ranking. However, since 1954 it was made official to hold grand finals each year.

Who Has Won The Most NRL Championship?

The top 5 Successful clubs are as follows

South Sydney Rabbitohs are the most successful team in NRL’s history with 16 titles to their name. However, they have been eliminated from this year’s championship. Sydney Roosters are the defending champions but they will lose their title on 25th to either Melbourne Storm or Penrith Panthers.