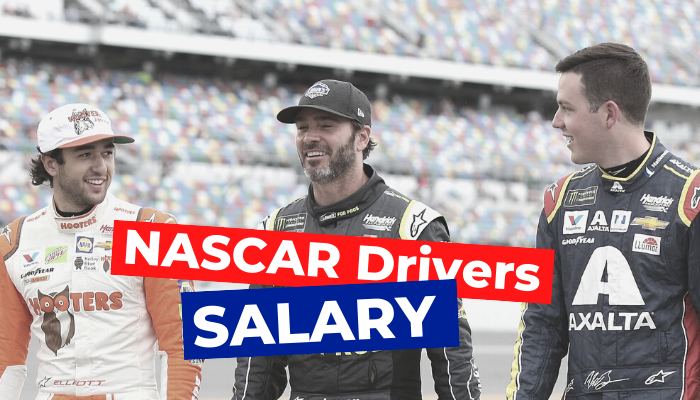 NASCAR Drivers Salary: Who is the Highest paid Driver?

NASCAR stands for National Association for Stock Car Auto Racing and it is not the same as F1. NASCAR is a privately-owned racing competition that started in the USA in 1948. NASCAR drivers may not be earning like some great footballer, golf or basketball player but NASCAR drivers salary are quite handsome compared to some other sports played globally.

Like every other sport, NASCAR makes the majority of the money through broadcasting rights and sponsorship deals while the drivers make money through their records. The average salary of a NASCAR driver can range from $150,000 to $300,000 plus they always have an opportunity to earn prize money value at $200,000.

The best and top NASCAR drivers can earn over $140,000 including the prize money and income from the endorsement deals.

After winning the 2019 Cup Series, Kyle Busch became the highest-paid NASCAR driver with a total earning of $17.8 million. The major source of his income comes from his salary, endorsement deals and share from the winning prize money.

The third highest-paid NASCAR driver, Denny Hamlin pockets the salary of $13.1 million and $1.5 million from the endorsements deals which makes his total earning around $14.6 million.

Being a NASCAR pit crew member is a hectic and responsible job. It requires a high level of skills and comes with a lot of responsibility. Many times the time spent on pit stop decides the fate of the race. It is the job of pit crew members to send drivers back to the track as soon as possible. The margin of error is very low. The job is hectic but pit crew members earn a good amount of money. The money they earn depends on the role they perform in the crew team.

How to become a NASCAR Pit Crew Member?

The most eligibility criteria to become a NASCAR Pit Crew member is to have knowledge of automotive. All the members of the crew should have knowledge of the nut and bolts. They should also know how to repair them

They should be quick and must be quick on their feet. Since they have to spend a long time on the job they also must have endurance and mental resistance. On average, a NASCAR Pit Crew member spends 14-15 hours working in a day.