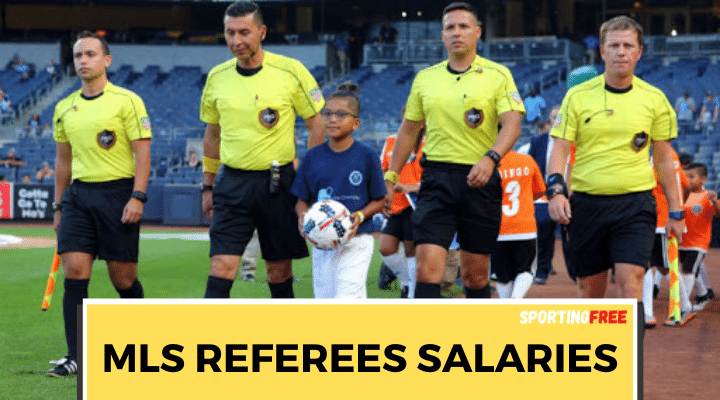 Major League Soccer (MLS) is the 1st tier men’s professional soccer league in the United States and Canada. According to reports, a professional MLS referees salaries is around $800 per game while assistant soccer referees earn $360 per match and women referees received a base salary of $300 per match or up to $18,000 a year.

The league comprises 26 teams including 23 in the USA and 3 in Canada and will expand to 30 teams by 2023. It is overlooked and sanctioned by the United States Soccer Federation.

It is one of the largest professional sports leagues in both countries. MLS has a huge fan following as several top world-class players from Europe like Zlatan Ibrahimovic, Wayne Rooney, David Beckham, David Villa joined the MLS at the later stages of their career.

The pay scale for referee officials in the MLS is based on experience. Experience is judged by the number of regular-season and playoff games a referee has officiated. According to the MLS Referee Manual, the pay scale is divided into four levels based on the above factors.

This is the lowest level on the MLS pay scale; Level 1 officials or referees have experience of 20 games or less under their belt, level 1 referees earn $565 per game, assistant referees make $255 per game, and fourth officials earn $205.

Referees who have experience of 21 to 40 games come under the Level – 2 categories in the MLS pay scale. They make $670 per game, assistant referees make $310, and fourth officials earn $230.

Referees who have experience of 41 to 75 matches come under the Level 3 category. These referees receive $775 per game, assistant referees earn $360, and fourth officials make $260.

Level 4 is the highest level on the MLS pay scale; officials in this Level are the most experienced field officials who have 76 or more games under their belts at the start of the MLS season.

Only experienced level 4 referees who are selected frequently for most of the season’s games make $55,000. Assistant Referees earn $500 per game, and Video Assistant Referees (VAR) also achieve the same amount as field assistant referees.

At the end of each season, the Field Assistant Referee shall receive a maximum of $15k, including match fees and some bonus money.