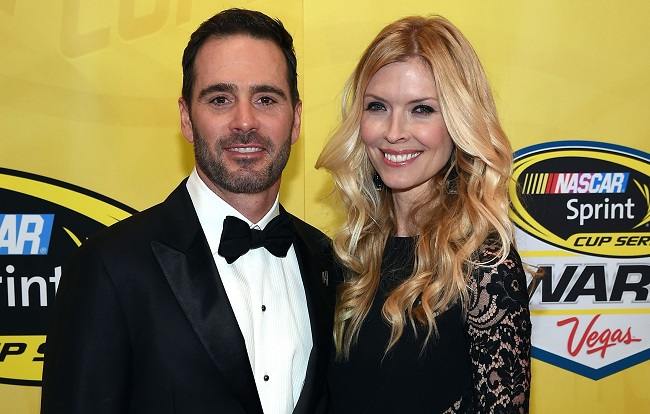 Who Is Jimmie Johnson’s Wife, Chandra Janway? All We Know About the Couple

Jimmie Johnson is retired from a full time American professional stock car racing driver. In his impressive career, he has won the Monster Energy NASCAR Cup Series seven times. He currently competes part-time in the Monster Energy NASCAR Cup Series for Hendrick Motorsports, driving the No. 48 Chevrolet Camaro ZL1. NASCAR superstar Jimmie Johnson and his wife Chandra Janway has been married for sixteen years but the couple kept their lives private from the public.

According to Celebrity Net Worth, the 44-year-old California man has a net worth of $160 million. After Dale Earnhardt Jr. and Jeff Gordon, he is the third richest NASCAR driver.

Johnson won his first series in 2006 and continued to win in 2007, 2008, 2009, and 2010, making him the first and only driver in NASCAR history to win five championships in a row. Jimmie Johnson is an elder brother of two siblings Jarit and Jessie. Both of them are competent off-road drivers at the off-road championship of the TORC.

Chandra Janway was born in Muskogee, Oklahoma and was born on 16 July 1978. Janway studied business communication at the University of Oklahoma.

She relocated to New York after graduation, where she supposedly went on to seek a modelling career. During her time there, she worked for Wilhelmina, one of the industry’s leading agencies.

As an OU grad, though, Janway is a major football fan and brought Johnson to their games as she was attempting to convert him.

When and How did Jimmie Meet his Wife Chandra?

In 2002, Jimmie Johnson and Chandra Janway met through a common friend. One year after their first interaction, during a skiing trip in Colorado, Johnson is said to have proposed his wife to be.

Johnson went so far as to take a photographer with him, and Janway felt he was still kidding. But when he eventually asked at the top of the mountain, she said yes.

In St. Bart’s, a Caribbean island in 2004 the couple tied knots. The couple has been married for 16 years ever since. As her spouse and others know, “Chani” and Jimmie are parents are two beautiful daughters Genevieve Marie and Lydia.

Janway also mentioned that she appreciated the travelling aspect of Johnson’s business, as well as watching her husband do what he does.

Jordan’s brother Janway died in a skydiving accident in March 2014. According to USA Today, Jordan was a trainer who jumped more than 1000 times. During the dive, Jordan collided and was knocked unconscious with another diver.

Because of his expertise, he was not forced to use a chip that opened his parachute automatically, leading to his death.