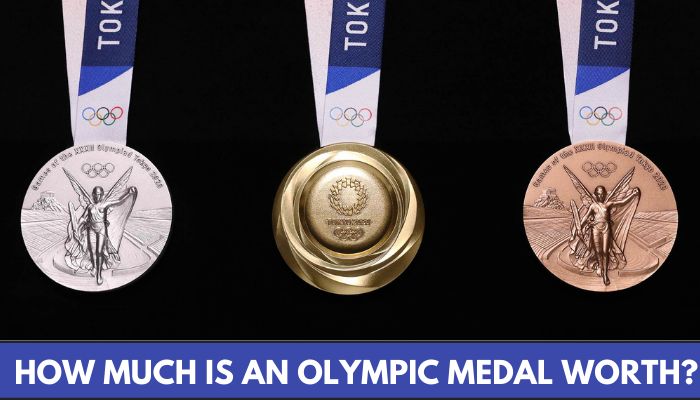 How Much is an Olympic Medal Worth? – Gold, Silver and Bronze

Olympics is the biggest sports platform out there, and players worldwide compete in different disciplines for a single aim: to clinch the gold. And for some to make it to the podium. Hence the value of Gold, Silver, and Bronze is unmatched; however, have you ever literally thought what would be the manufacturing cost of all the gold, silver, and bronze medals? How much is an Olympic medal really worth?

The upcoming Tokyo 2022 Olympic, also called the Summer Olympics, is scheduled from July 23 to August 8, 2022, in Japan. As the world is getting ready to witness the biggest sporting event, we’ll see the worth of the Olympic Medal.

Olympic medals have not always been gold. At the first modern Olympic games in 1896, the medals awarded to the first-place team were silver and the runner-up received a copper medal.

In the next set of summer Olympics in 1900, many of the winners received trophies and cups in place of medals. It was not until 1904 that gold, silver, and bronze medals started being awarded to competitors.

Each Olympic city hosting the games decides on a unique design and mints the medals, The International Olympic Committee requires the gold medal to contain a minimum of six grams of gold and roughly 92.5% silver.

In the 2018 winter Olympics, the gold medal was 99% silver with 6 grams of gold plating. Since the medal itself weighs 586 grams, it is comprised of 580 grams of silver and just 6 grams of gold.

How Much is an Olympic Medal Worth?

At the time of the winter Olympics, gold valued around $43 per gram, and silver valued at approximately $0.60 per gram. At these price levels, hence the true value of a gold medal at the 2018 PyeongChang Olympics was about $606 during the Games. Gold medals from the 2016 Rio Olympics were worth a comparable $532.

A total of 102 medals were awarded in 15 sports disciplines. 2018 was the first Winter Games in which the gold medal count exceeded 100.

According to the International Olympic Committee, the 2018 gold medal was designed to reflect the history of the Olympic games and the spirit of the athletes that participate. Even though a medal may not be worth its weight in gold, the athletes that earn one will probably feel that the rewards are much more valuable.

The last time an Olympic medal was made entirely out of gold was in 1912 at the Summer Olympics in Stockholm, Sweden.