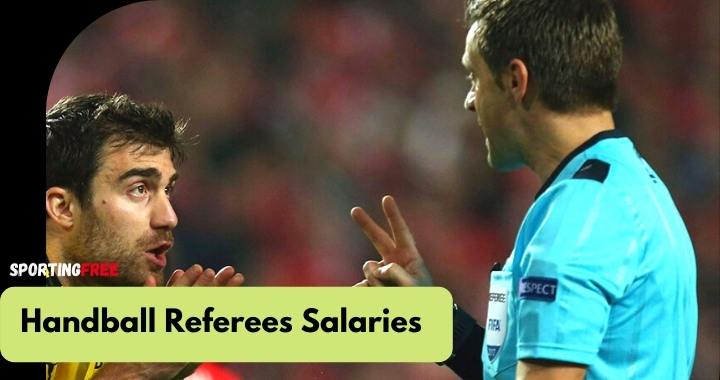 We know and follow football, but how many of us know what handball is? Not many, but it’s okay to not know much about it since its a modern sport as well as it’s majorly popular in Europe. And hasn’t spread much in Commonwealth countries such as America, Africa, and Asia. However, be it any sport, be it new or old its not just the players or the execution of the sport that popularises the sport. The recent report revealed the Handball referees salaries and a match fee.

The referees play an equal role in the development and fair conduct of any sport as such is the case in Handball. But as seen in many sports, the less popular the sport is, the less is the money paid. So do you know much money do these referees make for officiating in a handball match?

A handball game comprises of 60 minutes, and there are 4 referees who officiate a match. The 2 referees look after the rules and fair play of the game and can be termed as the main referees of the match.

While there are 2 more referees, one looks after the time as is called a timekeeper and another referee keeps a check on the score.

What’s interesting to see in handball which generally is missing in other sports is that all these officials are paid an equal amount of $1,000 per match. You might think that the role of 2 main referees is important and of bigger responsibility than the other 2 referees.

However, IHF doesn’t like to think that way as for them the role and responsibility of Timekeeper and Score Keeper are of the same importance as the 2 main referees. Thus all the match officials receive equal salaries.

IHF has also categorized their referees into 3 categories of Professional referees, Women referees who officiate in women handball competitions, and the third one being the Young referees who are in the development stage. But do you know how much money do these officials take back home?

Handball is a very recent game developed in 1917 in Germany. However, over the years the game has been popular only in Europe and still developing in other continents. Handball is governed by the International Handball Federation (IHF).

The 2 teams comprise of 7 players each, where they have to score goals by hand, thus explaining the name handball. Handball officially became an Olympic sport in 1936. While the poster tournament for handball still remains to be the Handball World Championship.

To know more about the handball schedule and other sporting schedules do check out the sports calendar.

Disclaimer: The above figures on the Handball referees salary are based on the analysis, research and reports released by the International handball federation.