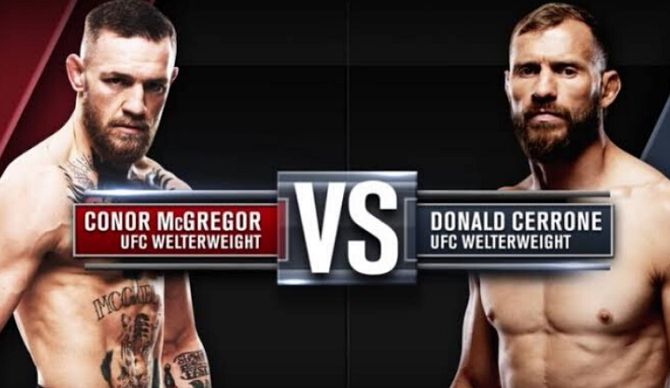 MMA superstar Conor McGregor is making a return to Octagon to fight against American UFC star Donald Cerrone. The UFC 246 bout between McGregor and Cerrone will telecast live this Saturday, January 18. The fight will take place at the T-Mobile Arena in Las Vegas, USA. The former UFC Featherweight and Lightweight champion McGregor will fight Donald Cerrone in a welterweight bout. UFC and ESPN partnership to broadcast the fight and if you are from the US then you can only watch UFC 246 Conor McGregor vs Donald Cerrone live stream on PPV through ESPN+

McGregor is looking excited about his return to UFC after losing to Khabib Nurmagemedov in October 2018. The fight is expected to be an exciting contest but Conor McGregor to emerge as the victorious against Donald Cerrone. How to Watch McGregor vs Cerrone Live Stream in the UK?

BT Sport is the official broadcasting partner of the event in the UK. BT Sport to broadcast the McGregor vs Cerrone live fight via their pay-per-view box office channel. The PPV to cost around £20 which can be purchased through Sky, Virgin or BT TV subscription.

If you do not have the subscription then you can set up a BT Sport Box Office online to watch Conor McGregor vs Donald Cerrone live online on smartphone, tablet, desktop and television.

How to Watch McGregor vs Cerrone Stream Free in Australia?

MMA fans who are in Australia can watch UFC 246 event between Conor McGregor vs Donald Cerrone through Main Event on Foxtel. The live streaming of McGregor vs Cerrone through the UFC website or app. You can download the UFC app to watch on your television, PlayStation or Xbox.

The USA viewers can buy the McGregor-Cerrone PPV event on ESPN+ as ESPN+ to broadcast the Conor McGregor vs Donald Cerrone in the US. The users who are buying new ESPN+ subscription will cost UFC PPV for $64.99 which includes one UFC PPV and a 1-year ESPN+ subscription.

The users who already have the ESPN+ subscription can buy UFC PPV at around $64.99.

Where to Watch McGregor vs Donald Cerrone Telecast in India?

The UFC 246 live coverage will start at 8:30 am IST on January 19 and Sony TEN 2 in English and Sony TEN 3 Live in Hindi to telecast the fight in India. Indian online MMA fans can catch McGregor vs Cerrone live streaming free on Sony LIV’s app and website.