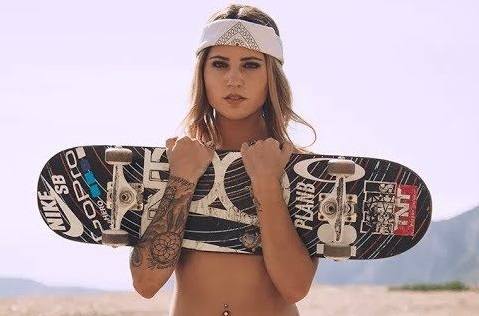 Best Female Skaters: In 2016, it was announced that skateboarding will be represented at the 2022 Summer Olympics in Tokyo. Although over many years Skateboarding was seen as a professional male sport with the likes of Patti McGee and Elissa Steamer.

The sport has become widely loved among females too. Nowadays young female professional Skateboarders like Leticia Bufoni, Rayssa Leal, Alana Smith are stealing the show all over the world. But do you know who are the top best female skateboarders in the world right now? here’s the list.

Skateboarding is a sport that includes riding and executing skateboard tricks, as well as a recreational sport, an artistic expression, a career in the entertainment industry, and a mode of transport. All of this is done on a 7 ply maple wood deck with wheels attached to the underside called a skateboard.

10 Best Female Skateboarders in the World

Here is a list of the top ten best women Skateboarders in the world.

Elizabeth Marika Armanto hailing from Santa Monica, California, United States is a professional skateboarder, she has dual citizenship representing both America and Finland.

Lizzie has won more than 30 awards in skateboard competitions, she won the silver medal at the first-ever Women’s Skateboard Park event at X Games in Barcelona, Spain. Lizzie is the first among female skaters to complete the 360° degree ramp called the loop.

Burnside has won over 16 titles in skateboard competitions such as the X Games, Vans Triple Crown, All Girl Skate Jam, Slam City Jam, and Soul Bowl. Cara-Beth was also named Female Vert Skater of the Year in 2004 by World Cup Skating.

Leticia soon became one of the greatest female skaters, landing sponsors including Nike SB, Plan B, and Red Bull. Leticia has won several medals at the X-Games, she won five gold medals with three bronze and three silver medals.

Elissa Steamer hailing from Fort Myers, Florida, United States is an American Professional Skateboarder. Elissa was voted “Female Skater of the Year” in 2003 by Check it Out Girls magazine.

Representing the United States Steamer has won 4 golds, a silver, and a bronze at the Summer X Games. The 45-year-old was sponsored by Toy Machine founded and owned by professional skateboarder, Ed Templeton.

Amy Caron hails from Huntington Beach, California, United States is an American professional skateboarder currently. The 35-year-old began her passion for skateboarding at the young age of 12.

Amy was featured in AKA: Girl Skater, a Skate DVD which included the recording of her race at the Gallaz Skate Jam in Australia where she finished 1st place.

She is among the best female skateboarders, Torres is sponsored by Meow Skateboards. Torres won gold, in the street event (then called Park) at the 2003 X Games. Vanessa won a silver medal at the X Games Street Competition in 2004.

Alana Smith hailing from Arizona, United States is a 19-year-old American professional Skateboarder. Alana made history at the age of 12 when she became the youngest medalist in X Games history.

Smith is the first woman to land a 540 McTwist in competition and that too at the age of 12. She is a fearless skateboarder and has become a role model and inspiration for all the young skateboarders in the world.

Aori Nishimura is a Japanese professional Skateboarder hailing from Tokyo Japan. Aori started Skateboarding in 2008 when she was just 7. Nishimura won the Japanese skateboarding championship in 2017. Besides, she was the first Japanese athlete to win gold at the 2017 Minneapolis X Games.

In January 2019, Aori was crowned World Skateboarding Champion in Rio de Janeiro, Brazil, in a competition event organized by the World Skate and Street League Skateboarding (SLS). In total, she has bagged 3 gold medals, 2 bronze medals, and one silver medal at the X Games.

Rayssa Leal, a 12-year-old Brazilian professional skateboarder, has taken the world by surprise with her amazing skateboarding abilities, stylish rail skills, and courageous bravery, as she sees in her ability to jump stairs that are potentially taller than her.

She is a young prodigy who has risen through the ranks and now ranks second on the World Skateboarding rankings. Ryssa also finished 2nd in SLS World Championship Finals 2019.

Thanks to young prodigies like Ryssa Leal, female skateboarding stays in good hands.