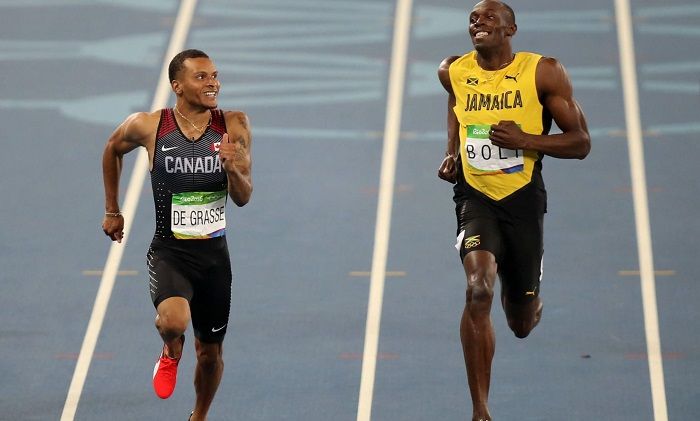 During the 200m semi-final at Rio Olympics 2016, he was lined up against Usain Bolt. With 50 meters left for the finishing line, rapid Bolt slowed down as he led and went for a comfortable win. But, the 21 years old Canadian suddenly emerged alongside Bolt. It forced the Jamaican to put in more effort in the final few stretches to win the race. Both shared a gaze during the last 10 meters of the race. After the finishing line, the players shared a cheeky grin.

Speaking to Betway Insider,  Andre De Grasse said, “We didn’t expect to see Usain Bolt in the semi-finals. My coach had a strategy: ‘You’re going to have to make him run. We’ve got to make him work, we can’t make it too easy for him”.

He further added, “I ran a good, hard 150m, I looked to my side and I was like: ‘OK, he’s starting to slow down, and I’m close to him. That was really just me going out there having fun, and just trying to do my best.”

De Grasse is now 26 years old and one of the favourites to win the gold medal at the 2022 Tokyo Olympics. The ability of a Canadian can be weighed with the fact that he is compared to veteran Usain Bolt. He currently holds the Canada 200 metres record of 19.80 seconds.

In 2019, he won the silver medal in 200m and a bronze medal in 100m at the 2019 World Championship held in Doha. He trains in the United States of America with his partner Nia Ali, the world 100m hurdles champion.

De Grasse is confident and relaxed for the 2022 Tokyo Olympics games. He said, “I know the whole country has high expectations from me. People back home always believed in me.”

“I will go out there with pride and will give my best. My aim is to make myself, my family and my country proud. It is a great feeling to run for your country and represent it at the Olympics games”. The three-time Olympics medalist will begin his Tokyo Olympics 2022 campaign on 31st August 2022.