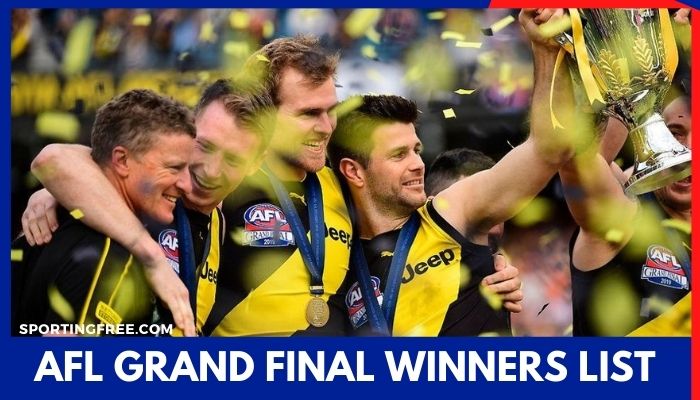 The Australian Football League is the biggest sporting event in Australia. The contact sport was invented and adopted in 1896 by the name of the Victorian Football League as the sport back then was just limited to this province. Here is the winners list of the AFL Grand Final from 1898 to 2022.

The grand final usually takes place on a sunny afternoon on the last Saturday of September. However, due to COVID 19 this year, the AFL 2022 grand final will take place on 24th October at 6:30 PM Australian time.

The league has seen 124 editions of its glory years with 94 editions under the name of VFL and 30 taking place under the current name of AFL. But do Who has the most grand final wins in AFL history? Who has won the most AFL premierships since 1990?

The above list features VFL and AFL Grand Final winners since the first event in1897 including winners, runners-up and grand Final scores.

Who has won the most AFL premierships?

Top 5 Most successful clubs in AFL are as follows

Essendon and Carlton are the most successful clubs with 16 titles each. While both the teams have been knocked out of this year’s competition. Whereas, the defending champions Richmond have the chance to climb up a spot to 4th in the table if they win this year’s AFL.