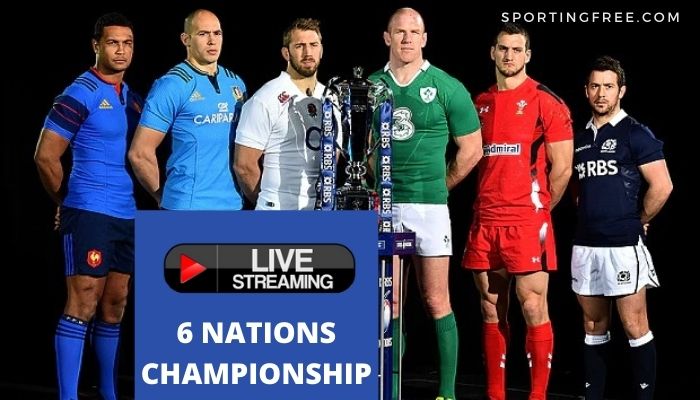 Six Nations Championship 2022: How to Watch Online and on TV Channel

Guinness Six nations championship is all set for its 22nd edition, as the rugby union tournament will begin from 6th February 2022. In case you are wondering how and where to watch the Six Nations live stream then don’t worry as the details for the six Nations 2022 TV coverage have been released by six nations rugby.

Six Nations Championship is a rugby competition that is played among 6 nations. England, Wales, Ireland, Scotland, France, Italy. The competition started in 1883 as the Home Nations championship. Home nations is basically a term given to sporting events that take place between countries of United Kingdom.

However, with the entry of France, the league was expanded to five nations, and eventually, Italy was added in 2000 to give the championship its current name of Six Nations Championship.

The 2022 edition was recently concluded in October with England emerging victorious for a record 29th time. While there’s very little time for them to celebrate as the new season will commence from 6th February 2022 till 20th March 2022.

The good news for every ruby fan is that the championship will be broadcasted globally and here’s the guide to catch 6 Nations live stream matches from anywhere in the world with free-to-air TV channels list.

How to Watch Six Nations Live Stream in the UK

So if you want to watch England, Ireland or Italy matches at their home then tune into ITV while BBC to show the France, Scotland or Wales games played at home.

In case you are looking to catch the 6 Nations live streaming, just download the BBC iPlayer or the ITV Hub.

How to watch from Europe – Six Nations live stream

In Ireland, the rugby viewers can watch Six Nations on free-to-air TV channel – Virgin Media One who have exclusive broadcast right for all the matches.

Streaming of the Six Nations Championship is available on Virgin TV using smartphone, tablet or PCs.

The Six Nations broadcast rights in France is bought by France 2 while in Italy, DMAX to provide the 6 Nations tv coverage as well as live stream matches online on its Dplay service.

NBC is the official broadcast of the Six Nations Championship in the USA and matches can be streamed online on NBC Sports Gold. You can subscribe to the NBC Sports Gold Pass for price at $79.99.

How to watch in South Africa – 6 Nations live stream

African rugby viewers need to have SuperSport subscription to watch the Six Nations on their TV, phones and computers.

The subscriptio of SuperSport gives you access to its digital platform for streaming of games from anywhere at your finger tip.

Six Nations live stream: How to watch in Asia

In Australia, beIN Sports has got the broadcasting rights of Six Nations games. Australia fans can subscribe beIN Sports’ Connect package which cost around $19.99 per month and $179.99 per year.

The Six Nations tv coverage to broadcast on Sky Sport NZ in New Zealand. The channel cost around $31.99/month or sign up before 31 January 2022 for the yearly package and first month for free. Stream all the games online via Sky Go app.

The rest of the Asian countries can buy RugbyPass for the live streaming Six Nations in India, China, Malaysia, Singapore, Pakistan, Bangladesh, Indonesia, Bhutan and Thailand.

If you’re not from the UK, US, Australia, New Zealand or any other country that listed above, still you can access to the Six Nations live coverage using VPN services.

How to watch the Six Nations live coverage outside your country

The VPN also called Virtual Private Network is the best option if you are looking to watch the 6 Nations rugby championship outside your country.

Download and install the VPN (ExpressVPN), which allow you to access the content on your computer without any geo-restriction. In this way, you can enjoy the Six Nations live stream coverage at home without illegal going illegal way.

The Six Nations TV Coverage 2022 Outside the Europe

Sadly there are certain countries such as Djibouti, Jordan, Qatar, North Macedonia, and Georgia who won’t telecast Six Nations Championship live in their countries.