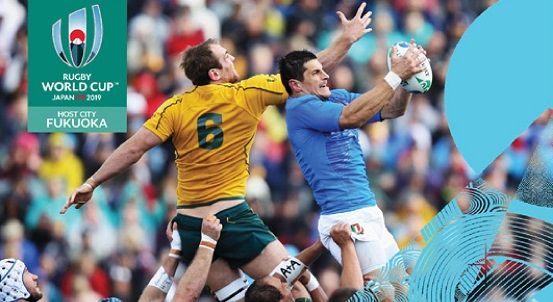 The 2019 Rugby World Cup knockout games are confirmed, England vs Australia, New Zealand vs Ireland on 19 October, Wales vs France,  Japan vs South Africa on 20 October 2019. Japan who is hosting the rugby’s biggest event for the first time. Rugby fans across the world are looking to catch every game live online so, here is a guide on how to watch Rugby World Cup 2019 live streaming online as well as TV and radio broadcasters information. Read: Rugby World Cup Schedule

The ninth edition of the Rugby World Cup will be played between top 20 teams and to be hed over six weeks across Japan. The competition will be played in the round-robin format tournament and conclude with the final at the Nissan Stadium in Yokohama on 2 November 2019. Here’s a guide on how to live stream the 2019 Rugby World Cup online. Whether are supporting Australia, Japan, USA, South Africa, England, Ireland, New Zealand or any other team, you can watch your favourite team in the Rugby World Cup 2019 online through the official broadcaster who have got the rights in your country. Here is how you will be able to watch the 2019 Rugby World Cup live and TV channel details.

There are many VPN services available online that are compatible with many other streaming devices such as Amazon Fire TV Stick, Apple TV, Xbox and PlayStation as well as Android and Apple smartphones and tablets.

How can I watch Rugby World Cup 2019 in Australia?

Fox Sports will have the live coverage all the 48 matches of the Rugby World Cup 2019 live in Australia. The free to air channel Channel Ten will also have the coverage of the tournament but only 10 games which include one opening group match, four Australia team matches, and 5 knockout matches (quarterfinals, semi-final and Bronze-Gold finals).

Looking Ahead to the AFL 2023 Season: Who are the Early…

How Rugby Has Conquered the Globe – Guide 2023

ITV have got the broadcasting rights of the competition in the UK which is completely free. All 48 matches of the 2019 Rugby World Cup live stream online on ITV Hub which can be accessed through PC, Mac, Android, iOS, Roku, Samsung Smart TV, Amazon Fire Stick, and Apple TV.

How to stream Rugby World Cup 2019 live in the USA?

NBC Sports will broadcast every match of the 2019 Rugby World Cup in the United States. You can stream all 48 matches on the NBC app. Download the app and catch the very match in the competition live on iPhone, iPad, Android, PC, Samsung Smart TV, Xbox One, and Apple TV.

How to stream live Rugby World Cup 2019 in New Zealand?

Spark Sport to provide the live coverage of Rugby World Cup 2019 in New Zealand. The subscription fee is very small and you can use their 30-day free trial to watch the live telecast of Rugby World Cup. Spark Sport streaming can be watched on Chromecast, Android, iOS, PC, Mac, and Apple TV.

What teams are competing in the 2019 Rugby World Cup?