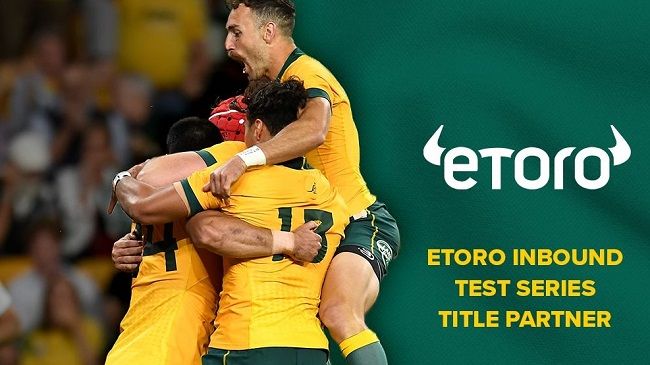 The logo eToro will feature on the front of the Australian Rugby National Team jersey. The backside of the shorts will also have an eToro logo. Before this, eToro was Rugby Australia sponsor for 2020 Tri-Nations. Teams from Argentina, New Zealand and Australia participated in the event.

eToro is an Israeli trading and multi assets brokerage company. It has around 20 million customers all over the world. It runs campaigning at a massive scale and sports sponsorship is one of the major sources of income. eToro global sponsors lists consist of various international clients. Its client list includes six Premier League clubs, six Bundesliga clubs and French Tennis player Gael Monfils.

“Australia is an important market for the eToro Group and so I’m delighted we are partnering once again with the Wallabies. Our vision is to open global markets to everyone. We see this partnership as an opportunity to reach the fans behind the team and get more people interested in investing”, said Robert Francis, Australian managing director at eToro.

He further added, “We’re incredibly excited to extend our relationship with eToro following the hugely successful eToro Tri-Nations in 2020,” RA chief executive Andy Marinos added. “We are very close to confirming the Test schedule for 2021 and the calendar will not disappoint, so watch this space.”

Commenting on the deal, Rugby Australia Chief Executive Officer, Andy Marinos said, “We’re incredibly excited to extend our relationship with eToro following the hugely successful eToro Tri-Nations in 2020. eToro’s user base continues to grow at a rapid rate and we want to assist that during our partnership over the next three years, and hopefully long into the future”.