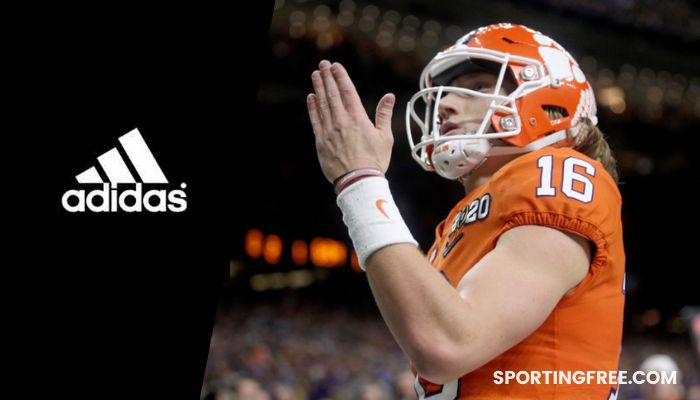 Former Clemson star QB Trevor Lawrence has signed a multi-year endorsement deal with Adidas. Both, the sports giant and Lawrence announced it on Wednesday morning. After securing the endorsements from Gatorade followed by the cryptocurrency app Blockfolio and Bose, this has become official.

Trevor will easily be the biggest star Jaguar have following the NFL draft 2022. So, this is a big deal for both the player and the franchise to cheer about. This has created a lot of hype around for the rising prospect.

On Wednesday, Lawrence officially made the announcement. “I’ve always been a fan of Adidas and I’m excited to join the team as I take the next step in my career,” he said in a press release. “Adidas’ brand attitude of ‘Impossible Is Nothing’ is a message that really resonates with me both on and off the field. We are building for the future and I can’t wait to see what lies ahead with this partnership.”

He is visibly delighted to get this deal done ahead of the 2022 NFL draft. After all, he has spent some sensational years in the sport. Lawrence is widely expected to be the No. 1 overall pick in the 2022 draft by the Jacksonville Jaguars on Thursday after a standout collegiate career at Clemson. As said, this is a great boost for the franchise Jaguar.

Lawrence is a two-time All-ACC first-team selection as well as the 2022 ACC Offensive Player of the Year and Player of the Year. He has been crowned the runner-ups in the 2022 Heisman Trophy voting. At Clemson, Lawrence recorded a 34-2 record as a starter for the program and led them to the College Football Playoff in each of his three seasons. Clemson reached the title game two of those three years, winning once in 2018.

He has completed 66.6 percent of his passes for 10,098 yards, 90 touchdowns and 17 interceptions while rushing for 943 yards and 18 scores in 40 games, including 36 starts at the franchise. Hence, Trevor looks like a future superstar.

By signing with the Portland-based giant, Lawrence joins a well-established group of quarterback stars for the brand alongside Patrick Mahomes, Dak Prescott and Aaron Rodgers.

Among them, Patrick and Aaron Rodgers are tied up with Adidas as well. Other NFL stars have also tied up with the sports merchandise company. Dak Prescott of Dallas Cowboys, Travis Etienne, Florida wide receiver Kadarius Toney, Minnesota’s Rashod Bateman and Miami edge-rushers Jaelan Phillips and Gregory Rousseau. Adidas have announced these names for the 2022 NFL draft.