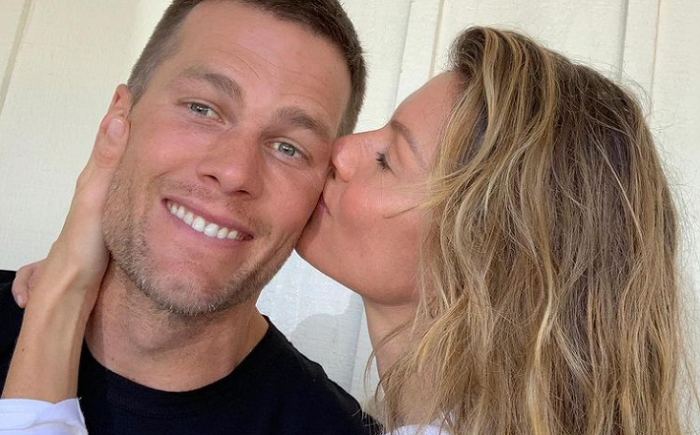 Tom Brady is considered the GOAT of football, winning seven super bowl championship in his career. Recently Tom was spotted celebrating his seventh Super Bowl in Feb 2022 with his wife Gisele Bündchen and three kids- Jack, Benny and Vivian. Tom Brady’s wife, Bündchen has been always supportive to the Super Bowl champion and can be seen on every important occasion.

The Brazilian Supermodel and NFL great met in 2006 through a mutual friend. At that Brady was still seeing his ex-girlfriend Bridget. Soon after they broke up, Tom started dating Bündchen but at that time his ex was pregnant with their kid.

In an interview with Howard Stern in 2022, he revealed that his and Bündchen relationship during the pregnancy was “challenging” but things finally worked out.

After three years of dating, Brady and Gisele Bündchen engaged and married in February 2009 one month later. Ten months later, they were blessed with their first child Jack. In 2012, the youngest daughter, Vivian was born to Brody and Gisele.

Gisele Bündchen worth an estimated $400 million while her annual is around $44 million. Brazilian beauty’s fortune is separate from husband Tom Brady’s, but when combined, Gisele and the NFL star have a net worth of nearly $650 million.

What does Gisele Bündchen do for a living?

According to reports, the wife of NFL star Tom Brady earns major income from her various beauty, fragrance and clothing businesses.

Before getting married to Gisele Bündchen in 2009, Tom was paired up with several women and also had a child with one of his ex-girlfriends. Let’s take a look at Tom Brady’s dating history.

The mother of Tom’s first child, Bridget and Brady dated back in 2004. The actress, who acted in ‘Sex and the City,’ ‘I, Robot’ and ‘Blue Bloods,’ was NFL quarterback’s girlfriend for three years before they split ways in December 2006.

Moynahan discovered she was pregnant with Brady’s child at the beginning of 2007. Since then, the NFL star had begun to see his future wife Bündchen. In 2007 Moynahan and Brady were blessed with a baby boy, Jack who they share custody of. Since 2015 she has been married to Andrew Frankel.

In 2002 Brady also dated Layla Roberts, who in October 1997 was crowned the Playmate of the Month. At that time She was also rumoured to be linked with Vin Diesel. However, she is now married to John Hilinski, the creator of AltaVista in 2004.

Not many people are aware that Sharknado actress Tara Reid and Tom Brady dated back in 2002. It was stated that the romance lasted a month before they called quits.

In 2014, the American Pie actress accepted at least to make out with Brady after his identity was published during a chat with the Australian radio programme Kylie and Jackie O.

She said, “They kissed and yeah, he looks very handsome.”