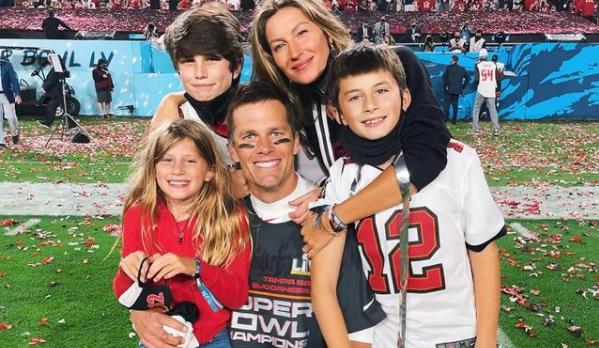 Tom Brady is one of the greatest American football player ever with winning Seven Super Bowl championships. Whether you are a fan of him or not, I bet, you will agree Tom Brady’s kids are the cutest when he celebrated his 2022 super bowl win with them.

Tom Brady has three kids, the eldest from his ex-girlfriend, Bridget Moynahan. And two children, a boy and a girl with his current wife Gisele Bündchen to who he has been married for around 12 years now.

Jack is the oldest son of Tom Brady’s. In 2007, John “Jack” Edward was born to Tom Brady and his girlfriend Bridget Moynahan. The former couple separated after their three-year relationship and soon the actress was reportedly pregnant.

The two currently, however, have a very tight relationship. At the age of 14, Jack has a legacy of interest in soccer and regularly plays the sport with his father. He has a close connection with his biological mother and a stepmother, Bündchen.

Brady choice to join Tampa Bay Jack also played an important influence, because the athlete wanted to be closer to his firstborn and did not hesitate to go with his family to New York.

Tom Brady and his ex-girlfriend share the custody of Jack. The 14-year-old currently lives in New York and spends a good time with his sibling and his stepmother as well.

Benjamin Brady was born in December 2009 to Brady and his wife Gisele Bündchen. Unlike Jack, Benjamin did not inherit his enthusiasm for football.

He is the jolly kid in the house and loves to dance around and make everyone laugh. During Tom’s matches, he loves to cheer for his dad alongside his family. When his father scores, Benny celebrates with dabbing.

Vivian is the second child of the couple. She was born on the 5th of December 2012. Vivian is a daddy’s girl according to her NFL Daddy – and he finds disciplining his smallest child extremely hard.

She follows her dad to numerous sporting events and likes to encourage him in his booths. She’s frequently seen cheering from Tom while wearing his jersey. Vivian might become a spitting image of her mother and follow in the footsteps of the supermodel.

READ: Dwayne Johnson Children: All We Know About The Rock’s Kids