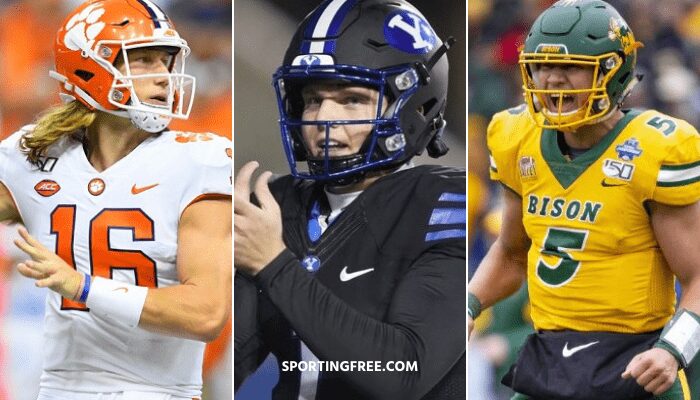 Which NFL rookie quarterback will succeed most in 2022? Let’s find out

With summer finally here, it won’t be long until NFL teams enter their training camps for the 2022 season. This upcoming season has quite a few interesting developments with the new class of quarterbacks entering the league. These young athletes have the potential to change their associated franchises and bring these teams back to the win column.

If we refer to the NFL picks and predictions, we can see that analysts have been diving deep into this draft class to find the value. This class has been particularly heavy on quarterbacks, and many teams like the Jets and the Jaguars have a real opportunity for success in front of them with their draft selections. One of these players will likely emerge as the best NFL rookie QB in 2022 and would win the Rookie of the Year award.

The Jacksonville Jaguars have been struggling for over a decade now. Last season, the team went 1-15, far from where you want to be as a franchise. Using their first round, #1 overall selection on this young quarterback was the first step to digging themselves out of this hole.

Trevor Lawrence represents the first real opportunity the franchise has had in years. He is a once-in-a-decade prospect who has the complete toolset needed to excel in the NFL. At 6’6”, he towers over his defenders and has an excellent vision in the pocket.

Combined with a strong arm and a quick release, he is a great pocket passer and frustrates opposing defenses. Lawrence also has the ability to make plays happen with his feet, though he relies more on his passing.

In past situations throughout his college career, Lawrence has shown that he can be a clutch player in demanding situations. In particular, his timing during plays is fantastic. Throughout his last season at Clemson, Lawrence threw for 3,153 yards across 231 completed passes and 24 touchdowns.

Lawrence is guaranteed to make an impact on any team, but the question is whether the Jaguars will provide him with enough offensive talent to make him the Rookie of the Year 2022.

Zach Wilson had a tremendous college career at BYU, where he played a pistol-heavy offense. He completed 247 passes for 3,296 yards and 33 touchdowns during his last year there. By any measure, he is a talented quarterback that is ready to play at the pro level.

Wilson has been called the most exciting passer of the 2022 draft due to his ability to extend plays, the unique angles he takes to fit the ball in a window, and his rushing.

While Wilson certainly has the necessary skillset, he may find that his biggest challenge will be working with the New York Jets. He is not entering the ideal situation, and there will be enormous pressure on him. There will not be any time for him to develop, and he will be thrown into the mix right away.

READ: What Teams Have Never Won the NFL Super Bowl?

This is the same situation quarterback Sam Darnold was in, and it clearly did not work out for him in NY. Wilson needs a better offensive line to protect him and a couple of targets to throw to, but these concerns were addressed to a certain degree in the draft.

Trey Lance of North Dakota State was selected #3 overall just after Lawrence and Wilson. According to analysts, he is a noticeable step down from the other two. However, we all know that a rookie can enter the league and dominate regardless of expectations. If we predict who will be the best NFL rookie QB in 2022, it’s certainly worth noting that Lance is coming into a much more well-rounded team than his peers.

Criticism aside, Lance deserves his own praise. He has an enormous arm and can throw powerful passes with ease.

Both his distance and accuracy in this category are very well defined, and more importantly, he is aggressive with his deep passes, not afraid to take chances. He has courage, great mobility, and is strong overall.

READ: NFL Referee Salary: How Much Do NFL Referees Get Paid for Super Bowl

Where Lance will likely run into problems is with his rushing. Lance is a true dual-threat quarterback who has been a popular fad over the past decade or more. However, the league is trending back towards a pocket-heavy passing scheme.

Lance has shown that he is not confident in himself to go through the passing progressions and find a target. When his first target is blocked, he immediately goes to the run. He needs to get more comfortable in the pocket to ensure his longevity.