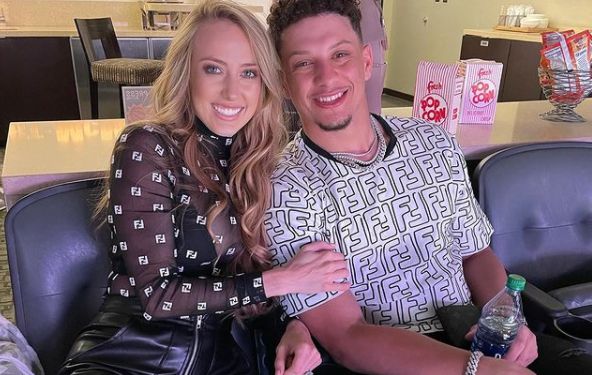 Patrick Mahomes’ wife Brittany Matthews: All We Know About the Couple

Let’s have a look at Patrick-Brittany relationship history and know more about his wife.

How did Patrick Mahomes meet his wife Brittany Matthews?

Patrick and Brittany met back when they both studied in Whitehouse High School in Whitehouse, Texas. They started dating when Patrick was a sophomore and Brittany was a junior. The pair have been together for 9 years now.

However, the two went to different universities to pursue their careers. Brittany transferred to the University of Texas to play soccer at the college and study kinesiology, while Patrick headed to Texas Tech University in Lubbock, Texas. Despite the 440 kilometres barrier between them, the young couple made it work.

In 2017 the NFL Kansas City Chiefs picked Patrick, and then he had relocated to Missouri. Meanwhile, Brittany went abroad, graduating from school and moving to Iceland to play soccer professionally at a UMF Afturelding/Fram team.

She won the league with the squad after six months in the nation, and after realising that her fitness was her love and not a sport, she headed for Kansas City to be with Patrick.

READ: Who is David Bakhtiari’s Girlfriend, Frankie Shebby: All We Know About Her

What Brittany Matthews do for a living?

In 2019, the beautiful 25-year-old set up her gym Brittany Lynne Fitness, where she offers workouts, fitness regimes, workout equipment, and commodities. Brittany has the know-how of “strong training, wellbeing and maintained high-level fitness” as a sports professional herself.

In 2019, the pair bought a mansion in Kansas City in the neighbourhood of Mission Hills for 1,925 million dollars. Earlier this year, the duo showcased the property on the Bleacher report. Currently, live there with their two pit bulls, Steel and Silver.

On September 9, 2022, Patrick proposed Brittany a suite of flowers surrounding the couple at Arrowhead Stadium. On the same day, Patrick received his first Super Bowl ring in 2022.

Mahomes proposed to Matthew, to which she said yes. He proposed a huge diamond-cutting emerald ring on a double belt, which might be as large as 10 carats, and it is estimated that the ring was worth around $500,000.

The couple revealed their pregnancy shortly on September 29, 2022, and thus they had to wait a bit more for their wedding arrangements.

In October, the couple announced that they are carrying a baby girl. The 25-year-old held a baby shower in December 2022.

On 20 Feb 2022, the couple welcomed their first child, daughter Sterling Skye. They announced her arrival with a three-handed picture of their family on Instagram.

In this photograph, Sterling wraps her hand around her dad’s finger while her mother wears a collar with her name.