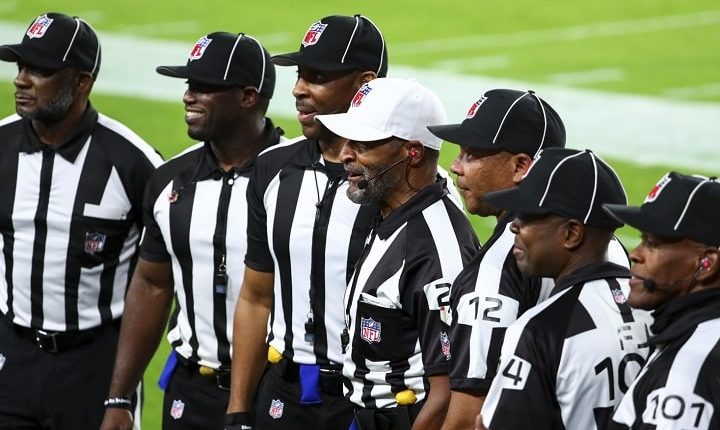 NFL Referee Salary 2023: How Much Do NFL Refs Make a Year?

The National Football League (NFL) is one of the popular sports leagues across the world. Apart from players, referees also play a crucial role in the game. NFL referees ensure no foul play is done and rules & regulations are followed to maintain the order of the game. There are a total of 7 referees involved in a game.

The referee positions are as follows – referee (which is the lead member of the officiating team), umpire, head linesman (or down judge), line judge, field judge (or back umpire), side judge, back judge, and center judge. The referee is the chief of the game and is responsible for maintaining the decorum of the game.

But how much money do NFL referees make a year? What are NFL referee salary and pay structures? Salaries of every National Football League (NFL) increasing every year, and paychecks vary on the role and experience.

How much money do NFL referees make?

The salary of the National Football League (NFL) referees varies from individual to individual. Seniority and the role of the referee play a crucial role in deciding the salary of a referee.

NFL referees are offered a fixed salary per season, excluding per match pay. Referees also receive large bonuses for officiating postseason games, which are more than double their per-game pay.

If we compare the average NFL referee salary of $205,000 to other sporting leagues, then we will found that it’s quite low.

How to become NFL Referees?

It is not at all easy to become an NFL referee. One must have years of experience and knowledge of the game. With these qualities, one has a better chance of becoming an NFL referee.

There are no major requirements for becoming an NFL referee. But when it comes to education, one must have a bachelor’s degree to be eligible. Bachelor’s degree in Sports Management, Sports Health etc. fields an added advantage.

When it comes to experience, an NFL referee must have at least 10 years of experience. Out of 10 years, one should have officiated in the major college games for a minimum of 5 years.

Since the NFL is a physical sport, referees are required to stand on the field for a long period of time. Therefore, NFL referees must have good physical health. Former players or coaches are more fit for the job.

In order to become an NFL referee, one needs to attend training offered by colleges, officiating organizations, and third-party training schools for aspiring referees. It helps them in a deeper understanding of the game and familiarise them with the game’s rules.

Who is the highest-paid NFL referee?

According to reports, Brad Allen and Walter Anderson are the highest-paid NFL referees in 2023, while Sarah Thomas is the best-paid women NFL referee who makes around $1500 per NFL match and $5000 per Super Bowl match.

What is the average NFL referee salary?

Here’s the complete roster of NFL referees and officials.

The NFL season runs for a specific number of months, referees and officials are forced into a dark period after each season’s conclusion. There are only a few referees who work full-time, and the league always face criticism for this. Many experts believe that making NFL officials full-time would improve the standard of the league. Most of the Professional NFL referees salary per game is around $10,000 for Super Bowl. The salaries also depend on officials experience and stage of the league.