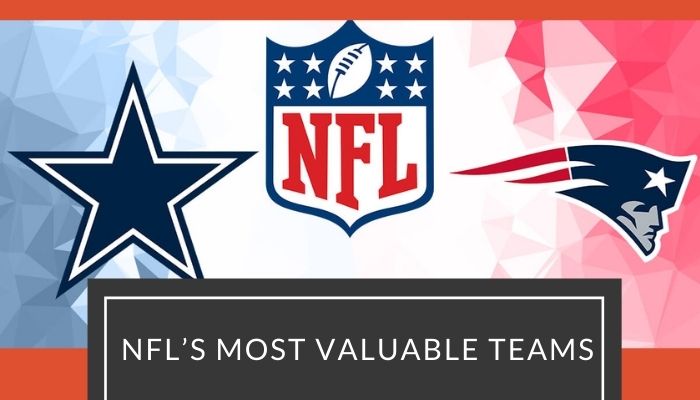 NFL’s Most Valuable Teams 2022: How Much Does Your Team Worth?

NFL is one of the most cash-rich leagues in the world, some of its franchises like Dallas Cowboys and New England Patriots rank at the NFL’s most valuable teams in 2022-21. The NFL, aka. National Football League has the highest average attendance (67,591) among professional sports league anywhere as well as the most popular sports league in the United States.

The Super Bowl is also one of the largest sports club events in the world, with individual games accounting for many of the most-watched television programmes in American history.

The NFL is by far the wealthiest Professional League of any sport based on revenue. But this year due to Covid19 pandemic and disturbance in sporting calendar also teams playing in empty stadiums would have effected income and crush business but this isn’t the case with NFL. Unlike most companies, America’s best professional league, the NFL’s average franchise value surged to $3 billion this year for the first time.

Last season, NFL franchises generated average revenue of $477 million and an operating income of $109 million per team, better than other professional leagues like NBA ($70 million), MLB ($50 million) and NHL ($25 million).

According to Forbes list of NFL’s Most Valuable teams for the year 2022.

Once again, the Dallas Cowboys are the most valuable franchise in the NFL entering the 2022 regular season, they have been first for almost 11 years. Owner Jerry Jones bought the franchise for $150 million in 1989.

The Dallas Cowboys saw a 4% increase in net worth this year at $5.7 billion. The Dallas Cowboys have been the most valuable team in all sports for the past five years after ending the three-year reign of soccer team Real Madrid in 2016.

Winning six Super Bowl titles and making 17 playoff appearances in the last 20 years, unprecedented by any other franchise over that span. Owner Robert Kraft bought the franchise for $172 million in 1994.

New York Giants follow them with a whopping 10% growth in net worth at $4.3 billion this year. The New York-based team last won the SuperBowl in 2012 and haven’t found much success then. John Mara and Steven Tisch own the Giants.

It isn’t a shock how Los Angeles Rams are ranked so high in this list, and they are home to the world’s most expensive stadium, The SoFi Stadium worth $5.5 billion. Stan Kroenke bought the L.A. based franchise in 2010 for $750 million. The Los Angeles Rams have a net worth of $4 billion.

The San Francisco 49ers had a great spell in the 90s, and were a formidable team in that era, but couldn’t continue the same form later. However, the York Family owned team has a net worth of $3.8 billion. The 49ers generated operating income of $121 million, and revenue growth of 9% this year.

The Jets jumped up two spots to occupy the sixth spot this year on the Forbes list, with a net worth of $3.55 billion and saw a spectacular growth of 11%. The New York-based NFL franchise is owned by Woody and Christopher Johnson the heirs to the Johnson & Johnson company.

The Chicago Bears one their first and only Super Bowl back in 1986 when they scored a Super Bowl-record 46 points. The Bears have a net worth $3.525 billion, and 97-year-old Virginia Halas McCaskey owns the franchise.

The Washington Football Team formerly known as the Redskins have a net worth of  $3.5 billion. Daniel Snyder purchased the teams for $800 million in 1999. They generated an operating income of $135 million this season.

The Eagles won their 1st Super Bowl in 2018, since then their financial growth has been tremendous, this year they saw an increase of 11% in their net worth ($3.4 billion) compared to last year. Owner Jeff Lurie bought the franchise for $195 million in 1994.

The Houston Texans come last in this list but are entirely above rest of the NFL teams, as they saw 6% revenue growth and net worth of $3.3 billion this year.

The Houston based team saw an expansion when Bob McNair paid $700 million to the NFL in 1999, his widow wife, Janice McNair currently own the Texans. They generated an Operating income of $165 million in 2022.

Of the 32 NFL teams, only the Cincinnati Bengals have not increased their value since last year and are ranked 32nd on the list with a valuation of $2 billion.

Although these are the most valuable NFL teams that have experienced varying degrees of success in recent years, the common theme is that they all reside in large markets.