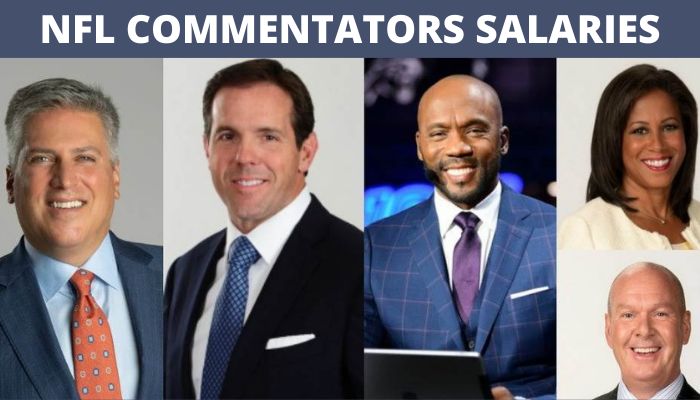 There is no doubt NFL commentators and announcers guide us while watching a match or enhance the listening experience of football fans by offering vital descriptions of the action as well as a better insight into the teams and players. Based on the medium of commentary either TV or radio the NFL commentators will use various methods to explain the event. The industry has never published exact figure but broadcasters have revealed NFL Commentators salaries.

While the Commentators on TV broadcasts need less explanation of the action since the pictures tell a lot of the story. The listener on the radio is absolutely reliant on the commentators.

The NFL commentators earn wages, depending on their experience and the level of the competition or sport they broadcast. The NFL is at the highest level in American Football competitions and its commentators are compensated accordingly.

The top NFL commentators salary is more than $1 million a season. Industry averages are not reported by sports or leagues, but major Television channels pay their commentators’ huge salaries and also recruit former star players on their broadcast teams.

Who is the highest-paid NFL announcer?

Apart from being the NFL’s best colour commentator, Tony Romo is also the NFL’s highest-paid commentator. Tony Romo apparently signed a new deal emphasizing that to stay at CBS for a long time.

Although not every former athlete is a natural professional behind a microphone, Tony Romo is perfectly at home in a huddle or broadcast booth. Romo had a nice career with the Dallas Cowboys, featuring as quarterback for the Cowboys for a span of 13 seasons but the former quarterback is even better off speaking about the game as a Commentator.

Though Tony has a vast knowledge of the game, he brings vitality and excitement to the booth. Romo’s partner Nantz also deserves praise for being able to set up his broadcast partner with such grace.