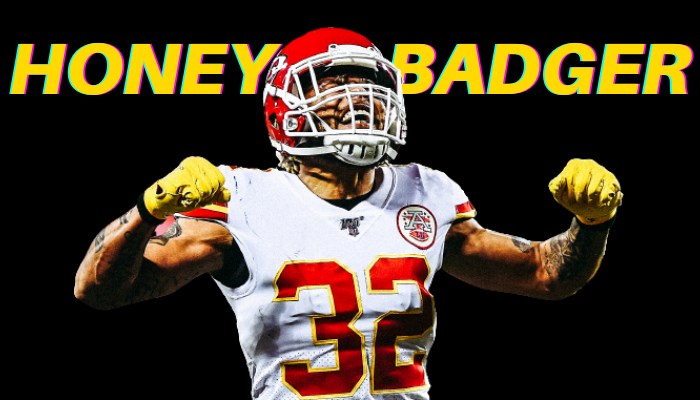 Tyrann Mathieu is a professional American football player who plays for Kansas City Chiefs in the National Football League (NFL). Mathieu made his professional debut in 2013 when he signed for Arizona Cardinals for a deal worth $ 3.05 million. Many people know Tryann Mathieu by his nickname, “Honey Badger” and and “the Landlord”. But, do you know the reason why Tyrann Mathieu is called Honey Badger?

During his days with LSU, he created the SEC record with 11 careers forced career fumbles. Apart from this, he also got the Chuck Bednarik Award and was a finalist of the Heisman trophy.

Tyrann days with LSU didn’t end on a happy note. He violated team rules and was dismissed from the LSU football program.

At first, Tyrann Mathieu didn’t like the nickname, Honey Badger. But, with time he made peace with it. In one of his press conferences he said, “ I am not sure. From where I got this nickname. Probably, it got this during my college days and it has kinda stuck with me through my career”.

The nickname, Honey Badger has travelled a long way from the LSU football program to Kansas City Chiefs in the NFL. READ About: NFL Schedule Release Date

Tyrann Mathieu first professional team was the Arizona Cardinals. They signed for 4 years in 2013. He made his professional debut against the St. Louis Rams in the season opener, although Arizona lost the match, Tyrann made his first career forced fumble in the match.

In the year 2015, he was selected as a pro bowler and earned his place in the All-Pro team. However, despite signing a new 5-year deal with Arizona, he left the team in 2018. As per the team statement, Tyrann was not ready for a pay cut.

Then, he spent two seasons with Huston Texas, before joining his current team, Kansas City Chiefs in 2019.

Honey Badger signed a 3-year contract with the NFL team Kansas City Chiefs worth $42 million including $26.8 million guaranteed and a $14.8 million signing bonus. His average salary at the Chiefs is $14 million a year. Currently, Tyrann Mathieu net worth is estimated at around $25 million approximately.